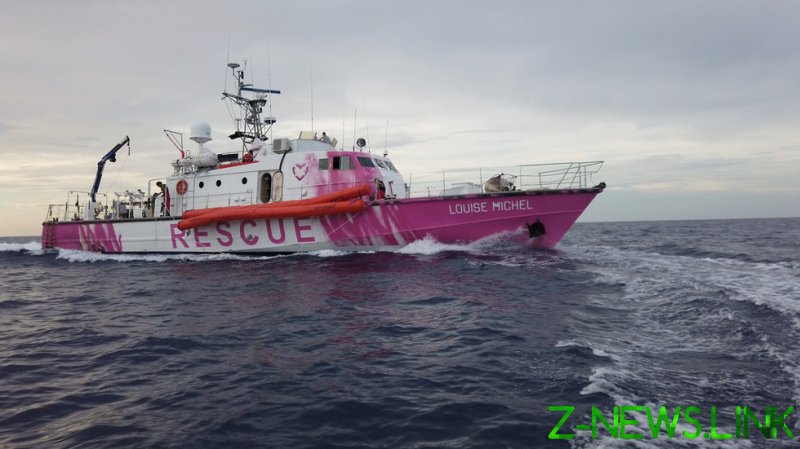 The vessel, which reported rescuing a total of 219 people from the sea over the past few days, including “many women and children,” had become so “overcrowded” that a life raft was attached to its side, and it lost its ability to maneuver. The crew’s Twitter feed suggests they have been desperately sending distress signals and making calls to various European maritime authorities to no avail.

To make the matters worse, one of the migrants died on the ship as conditions deteriorated.

“Louise Michel is unable to move … above all due to Europe ignoring our emergency calls for immediate assistance,” a tweet from the crew read.

Following about a day of pleas for help, Italy’s coast guard arrived at the scene and took 49 of “the most vulnerable” migrants in. While describing the development as “great,” the Louise Michel crew said it leaves the majority “still waiting.” It added that another NGO migrant rescue ship, Sea Watch 4, arrived to “do what Europe falters to do.”

Photos and videos apparently taken on board the vessel – a 31-meter motor yacht once owned by French customs authorities, now named after a French anarchist – show it is extremely crowded with people who are cooped up literally everywhere, from the foredeck to the aft and even on top of the captain’s bridge.

“There is already one dead person on the boat,” one of the crew’s messages said, demanding the EU authorities “do [their] job” and “do not let it become a body count.”

Painted in white and bright pink and featuring a Banksy artwork of a girl in a life vest holding a heart-shaped flotation device, Louise Michel is said to have set sail in secrecy from a Spanish port of Burriana, near Valencia. The first post in its Twitter account appeared about a week after what was called its first successful mission.

The ship, flying a German flag, is captained by Pia Klemp, a controversial German boat captain credited with rescuing more than 1,000 North African migrants between 2011 and 2017. The woman was charged with colluding with human smugglers by the Italian authorities in 2019 and defiantly snubbed Paris’ highest civilian award months later.

Reports claim that Klemp was personally contacted by the artist as early as in September 2019 and was offered assistance with buying a new boat. She told the Guardian that she sees the effort as “part of anti-fascist fight,” while adding that Banksy’s involvement in the project is limited to financial support. “Banksy won’t pretend that he knows better than us how to run a ship, and we won’t pretend to be artists,” she said.

Claire Faggianelli, another activist involved in the project, said the mission was supposed to become a “wake-up call for Europe” – but it has so far failed to impress the European authorities who are yet to comment on the situation.

Banksy previously sought to help refugees and migrants seeking shelter in Europe in other ways. In 2015, he announced that his Dismaland Bemusement Park – a controversial exhibition described as a “sinister twist on Disneyland,” which included acute social themes including mass migration – would be dismantled and relocated to the French port-city of Calais to be used as a shelter for migrants and refugees. The area at that time hosted thousands of asylum seekers who lived in the infamous ‘Jungle’ camp.