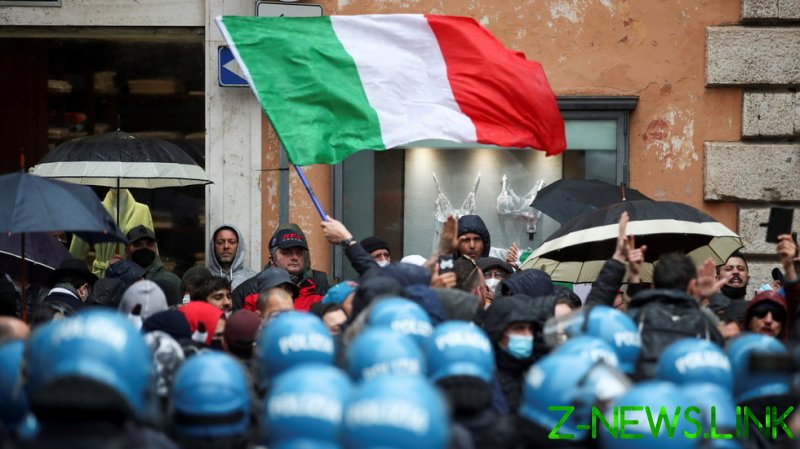 At least one protester was injured as a 500-strong crowd gathered in the capital on Monday, some of whom hurled stones and bottles at police, while others let off fireworks, Rome-based newspaper Il Messaggero reported.

There were chants of “freedom” and “we are all workers” as the crowd made its way to Draghi’s office, where protesters faced off with lines of riot gear-clad police.

Some 130 coaches full of people from across Italy arrived for the protest, with more than 50 people turned around by police at stations and toll booths as they tried to make their way into Rome.

While heated, the protest was less violent than another demonstration in Rome last week, where policemen were among those injured amid clashes with bar owners and restaurateurs.

Many Italian business owners are angry at the government’s public health measures, with most areas of the country classed as either an ‘orange’ or ‘red’ zone, meaning hospitality is shut down and strict travel curbs are imposed.

More than 114,000 people in Italy have died from Covid-19 to date, and the number of people with the virus currently admitted to intensive care units is still rising.

The country has registered over 3.78 million confirmed cases of the coronavirus since the start of the pandemic.