Home / WORLD / ‘It will never happen’: Snowden laughs off suggestion Julian Assange or himself would ever get Nobel Peace Prize

‘It will never happen’: Snowden laughs off suggestion Julian Assange or himself would ever get Nobel Peace Prize 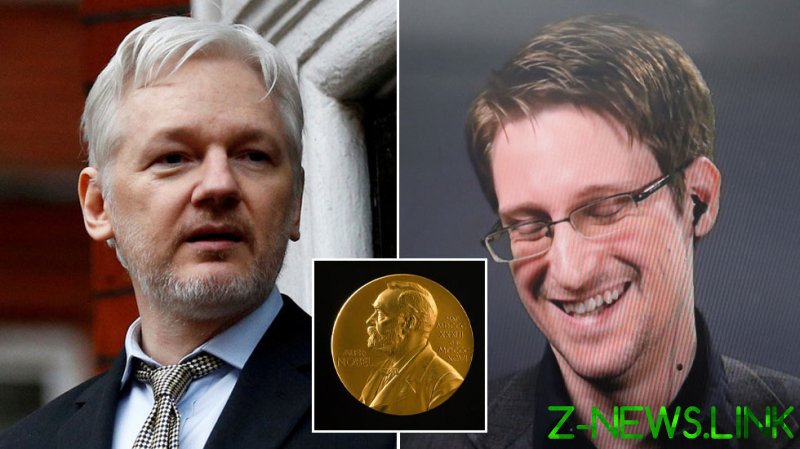 Snowden burst into laughter during an interview with the Russian media on Thursday, when the host asked him if Assange or he could imagine their nominations for the prestigious international award lead to either of them receiving it. “It will never happen,” he assured.

“The thing is, someone like Julian Assange does not take the risks he has taken for a chance to win some award,” Snowden added. “And I think doing good deeds is the only reward that is required.”

Assange, the founder of WikiLeaks, is famous for publishing leaked secrets through his organization, including those exposing the darker sides of US military operations in Afghanistan and Iraq. The US is trying to overturn the UK’s refusal to extradite Assange for a trial under espionage charges. The initial request was rejected by a judge, who said the Australian was in danger of taking his own life, if he were forced to go to the US. Assange remains in custody at a top security British prison.

Snowden became a world-famous figure after leaking to the media secret documents detailing illegal mass electronic surveillance programs by the US and its allies. Unlike Assange, he has kept his freedom, enjoying political asylum in Russia. Critics call him a traitor, with some even claiming that Snowden is a secret agent of the Russian government.

In the Thursday interview, the NSA whistleblower spoke about several serious issues, like the outcome of US military intervention in Afghanistan or the corporate encroachment on privacy exemplified by Apple’s intention to scan content on its phones with the stated goal of cracking down on child pornography.

The Silicon Valley tech giant, which touts the security of its closed ecosystem as a major selling point, famously fought a legal battle with the FBI, refusing to decrypt content of criminals’ phones. The most-publicized case of this kind involved the device owned by the perpetrator of the 2015 terrorist attack in San Bernardino, California.

A vocal critic of the increasing intrusion into people’s privacy, Snowden said that Apple’s decision to scan phones sets a dangerous precedent. Once it introduces the technology, it would be much more difficult to say no to any powerful government that would want to use it to boost its own surveillance capabilities for whatever reasons. The principal threat is the same, regardless of which country does that, Snowden said, be it the US, Germany, Russia or China.

He elaborated on a wider problem, that of phone vulnerabilities and the burgeoning industry of hacking services targeting them, including on behalf of governments, like the infamous Israeli attack kit Pegasus. The trend for compromising is disconcerting, considering how much potential for abuse it creates, Snowden said.

“We need to have devices that are more secure, not less secure. The idea that we are creating an industry that develops insecurity, or anti-security, as opposed to improving security, is very problematic,” he said.

Speaking of the Afghanistan withdrawal, Snowden said the experience should make people pause and reexamine the notion that justice for the 9/11 terrorist attack should come “from the barrel of a gun” rather than from a courthouse.

“Bin Laden was a criminal. And what do you do with criminals? You take them to court, show the evidence and convict them. And then you punish them,” he said. The US “chose not to” arrest the mastermind of the pivotal terrorist plot and “instead we simply shot him.”

Like any war, the US occupation of Afghanistan came at a cost not only to Afghanistan, but also to the US itself, Snowden said. It was measured not only in dollars and lives lost, but in political fractures and social damage. Americans should ask themselves whether the war was worth it, “and if not, why we were there.”

Other questions were about personal matters, like Snowden’s progress in learning the Russian language. Snowden has been living in the country since 2013, when he got stranded at a Moscow airport after his passport was revoked by the US government during his transit flight from Hong Kong to Latin America. Moscow offered him asylum and later permanent residency for himself and his wife, Lindsay Mills.

Snowden acknowledged that his Russian will likely never be as good as a native speaker’s and said that some day his son, whom Mills gave birth to in Russia, would teach him the language. He also joked that his 2017 marriage proposal to Mills was rather belated and that if had waited any longer, “she probably would have taken it personally.”

The interview was part of an event dedicated to the beginning of the school year in Russia.