Home / WORLD / It may feel like Britain has ground to a halt, but it’s Covid, NOT Brexit, that is to blame

It may feel like Britain has ground to a halt, but it’s Covid, NOT Brexit, that is to blame 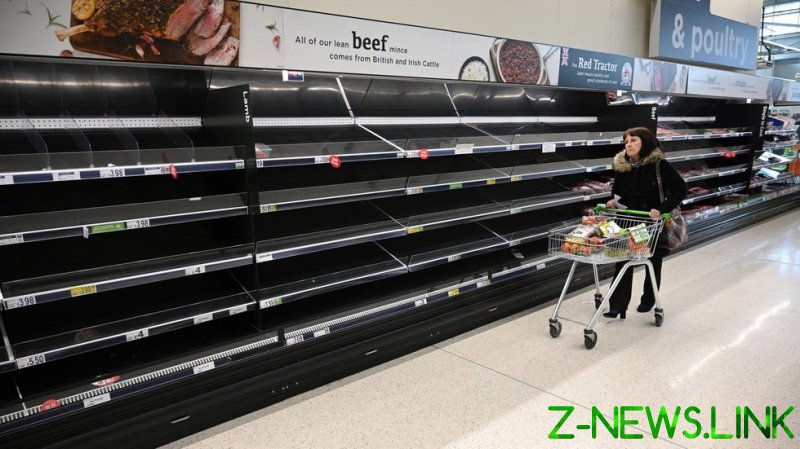 Empty supermarket shelves, chicken carcasses rotting in factories and fleets of lorries lying idly in yards. No, this is not a scene from an apocalyptic movie, it is modern Britain… if reports are to be believed.

I have to admit, I don’t recognise some of the descriptions of what is going on, but there does seem to be a slowdown in the UK’s economic recovery, and staff shortages appear to be the cause. And what is to blame for these staff shortages? Well, according to some, it is – of course – the harbinger of all society’s wrongs, the evil Brexit. The problem with this argument is that the current situation has not been caused by Brexit, but rather a pandemic that no one could have foreseen.

No one, and not even the most ardent haters of Brexit, could deny that the coronavirus pandemic changed everything; far more, in the short-term, than the UK leaving the European Union. Overseas workers returned home, not because of Brexit or that they weren’t welcome here anymore, as some would have you believe, but because the country locked down and there was no work.

Many have not yet returned either, also not because they are unwelcome, but because of Covid travel restrictions and the outbreak of the Delta variant in the UK earlier in the year. This, I repeat, has absolutely nothing to do with Brexit, and I suspect that many European Unions workers will return as soon as they can, or want to.

Then there was the whole ‘pingdemic’ farce, which resulted in 600,000 people isolating in one week alone in July. Many businesses were crippled over the summer by large numbers of their staff being contacted by the NHS app and then being forced to self-isolate.

Now what is to be done about this short-term manpower shortage? The British Retail Consortium (BRC) and Logistics UK claim that there is a shortfall of 90,000 Heavy Goods Vehicle (HGV) drivers and have asked the government to intervene. A number of companies, including the dairy producer Arla, have asked the government to increase the number of HGV driving tests and provide temporary visas for EU drivers.

And why not hand out temporary visas to EU drivers? I think it’s a great idea. In fact, the whole concept of taking back control of our borders with Brexit was not to pull up the drawbridge, but to have the ability to ask people to come to our country and work as and when we need them. We obviously require HGV drivers now, so it makes sense for the government to allow them to come.

Another industry which seems to be suffering is the supply of meat. Indeed, the British Meat Processors Association has suggested putting more prisoners on day release to ease the problem. Well, considering that the UK has more prisoners than it does soldiers, it might not be such a bad idea to have our incarcerated brethren using their time productively.

Rather than sitting around in their cell, playing table tennis or pumping iron, why not have them head down to the local factory to make up the shortfall in staff? Also, why not have them enrol on a course to get an HGV licence, so there would be jobs available when they are released? It would, I suggest, be good for the prisoner and good for society as a whole, so everyone’s a winner.

In the longer term, rather than return to importing tens of thousands of foreign workers, like we have for over a decade now, why not try putting our own people back to work? At the moment, there are 1.64 million people registered unemployed in the UK, and 530,000 of them are between 16 and 24 years of age.

Why can’t these young people be put to work in meat factories, or why can’t they go out into the fields and pick the seasonal fruit and vegetables? Indeed, fruit and vegetables never used to rot in the fields in the 1990s, before the UK farmers started bringing in hordes of seasonal workers from the EU, and factory floors were also not empty. So, I ask, what is so different now? Is it because British workers are lazy, like some suggest, or do businesses prefer foreign labour because it’s cheaper? I’m no Hercule Poirot, but I know where my suspicions lie, and it’s not with the unemployed.

Brexit gave this country the opportunity to chart its own course and make its own decisions. Of course, some people in politics and the media have never got over the fact that they lost back in 2016, and they make up all sorts of accusations to try to change public opinion. But they really need to move on, because I guarantee that the UK will not be rejoining the EU, at least not in their lifetimes.

Moreover, EU citizens are not leaving the UK in their droves because of Brexit, as some would have you believe. Indeed, when EU citizens were asked to register to stay back in June, nearly six million did so, which was 2.5 million more than the government thought were in the country in the first place.

The UK is a welcoming country, and the EU workers will return once the pandemic has fully passed. In the short-term, I would like to see the government hand out temporary visas to fill the gaps in the labour market. However, in the longer term, is there anything wrong with suggesting that it would be better for this country to get its own people trained and put into work first? I, for one, think it would be good thing for everyone.