Home / photo report / It looked like the first ever robots. Photo 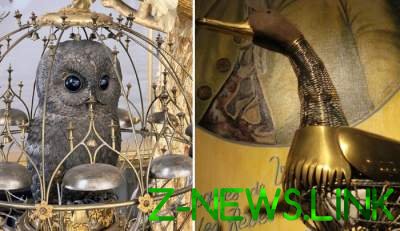 People are always attracted to this idea.

In Antiquity, people watching nature, wanted to join her in the competition and learn how to produce beings that are indistinguishable from those made of flesh and blood. Surveying philosophers, mechanics, and even the jewelers and illusionists of the past anticipated the emergence and development of modern robotics. 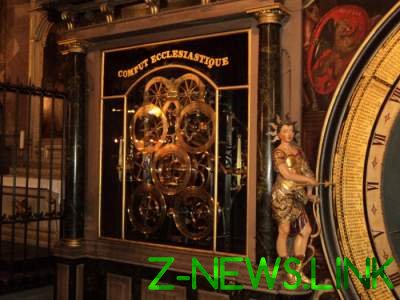 From wood pigeon to an artificial man

The Roman writer Aulus Gelli mentioned that the Greek General and philosopher archytas Of pythagoreas, “versed, inter alia, in the mechanics”, made of wood of a dove, which flew about two hundred meters. Among the fascinated spectators were the children for whom earlier this statesman, successfully defending from invaders who invented the rattle.

Work “Pneumatics” other ancient scientist Heron of Alexandria, mechanics and engineers used until the XIX century. Through the development of Heron in 1832, was designed the astronomical clock in the Strasbourg Cathedral, showing the movement of the planets.

Medieval Arabic inventor, al-Jazar, in the XIII century designed, among other things, a jukebox: the four mechanical dolls, which floated in a boat on the lake, playing on cymbals and drums. 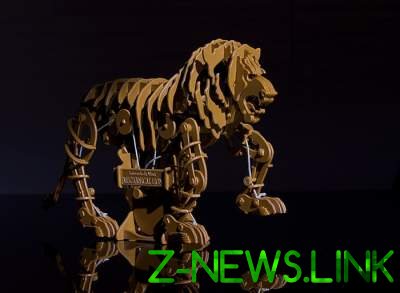 Mechanical musicians. Illustration of al-Jazar his treatise 1206, “the Book of knowledge of ingenious mechanical devices”.

In Christian Europe, daring and sinful, it would seem that the thoughts about creating an artificial man nurtured in the monastic cells. Have been preserved by the monks-scholars of Villard de Oncura and Raymond Lully. Albert Magnus, according to legend, managed to create “iron man”, but a masterpiece ruined, the disciple of Magnus — the future philosopher-theologian Thomas Aquinas.

Leonardo da Vinci and Galileo Galilei, as the Architecture Of, did not disdain the invention of mechanical trifle for kids. For king Francis I, Leonardo made a big toys: walking, opening mouth, waving his tail and spewing out of the belly of the lion lilies. 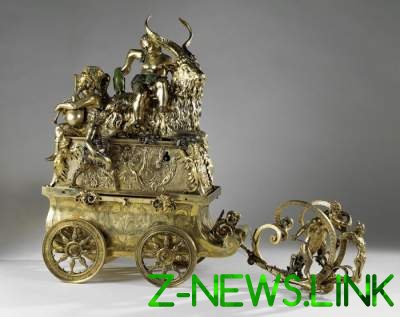 But the most cherished ideas of da Vinci remained in his drawings. Among them was a “mechanical knight” that was supposed to move their limbs, turn his head and raise his visor.

Foreign merchants who happened to feast at the court of Ivan the terrible, told that the Russian Tsar was a strange game: “iron man” serving the master and the amusement of the guests fought with the bear. When one of the merchants suspected that inside the metal shell hid a living man, the king commanded the workman to disassemble “the man”. The surprise of foreigners, who saw the gears and springs, loved the king, and he said that in Russia such a “Prodigy” were found three hundred years ago. To find out, the evil Ivan the terrible or not, scientists are not yet possible.

Mechanics and jewelers, do not put before itself ambitious goals, during the XV–XVII centuries perfected in creating the precious “trifles”. Such as across the table, a jukebox and a vessel for wine “Triumph of Bacchus”. 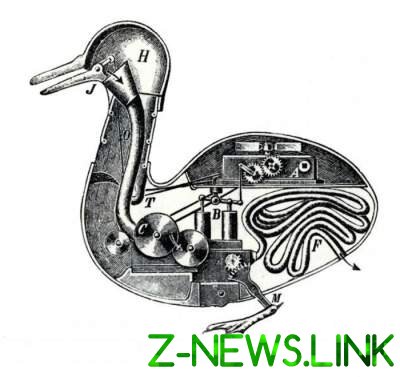 “Triumph Of Bacchus”. Germany, the beginning of the XVII century. Vienna, the Hofburg, the Treasure house of the Habsburgs

Automatons of the eighteenth century: musicians, royalty and ferocious predators

It is believed that a revolution in the art of creating artificial beings, sometimes frighteningly similar with the living, made the French inventor Jacques de Vaucanson. He also introduced the fashion public display of automatons. In 1730-ies Vaucanson spoke to the Parisians and Londoners, not just entertaining, but educating them as the shows of mechanical wonders were accompanied by lectures about the structure and action mechanisms.

More than three other well-known works of Vaucanson: “the Flutist”, which the author was awarded a separate booklet, “Tamburini” and “Duck”, “trained” to drink water, peck the grain and defecate. 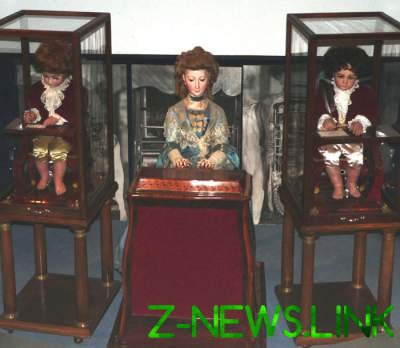 The Duck Of Vaucanson. Diagram of the device.

The Swiss Pierre Jaquet-Droz went down in history as a skilled watchmaker, an innovator in his craft. He founded the brand exists to this day. But first he became famous as a Creator of automatons. Three of his most famous mechanical men — “the Musician”, “Draftsman” and “Clerk” — sometimes referred to as the first robots. With them Jaquet-Droz traveled throughout Europe and was well received in the Royal courts. 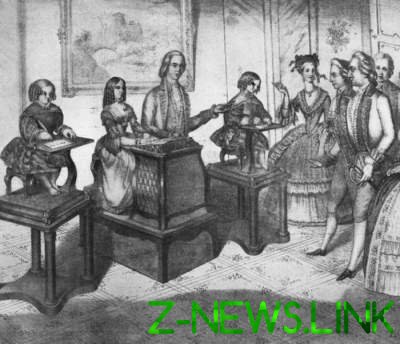 “Musician”, alternately playing the flute on five of his tunes, looked right and left. Artificial girl bent to the instrument, and her shoulders heaved from breathing. A separate mechanism is driven by flexible fingers.

But the most complex automaton of the Trinity was a “Clerk” — the boy who would dip a pen in the inkwell, write on a sheet of paper, any text not exceeding 40 characters. The second boy, “Draughtsman”, and copied the graphic thumbnail. In particular, he painted portraits of the French monarchs, the late Louis XV and Louis XVI still alive c wife. The three automatons of the Royal couple saw in Paris in 1775. 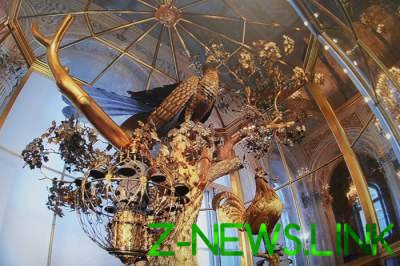 Lithograph of the XVIII century. Pierre Jaquet-Droz introduces the king Louis XVI and his creations.

One of the treasures of St. Petersburg Hermitage — luxurious Peacock clock, still working. Prince G. A. Potemkin ordered that James Cox, mechanic and jeweler, owner of a Museum of strange machines in London. To the Assembly and the restoration of the masterpiece of Coke and the best of his assistants Friedrich Yuri had a hand Russian craftsman Ivan Kulibin. 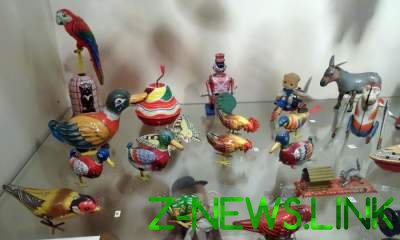 Kulibin himself in 1769, presented to Catherine II miniature compared to “Peacock” but not inferior to him in difficulty watch the egg. They had built a tiny theater in which jewelry crafted “actors” played the presentation on biblical themes.

In 1799, during the colonization of India, British soldiers stormed the Palace of Tipu Sultan, ruler of Mysore state. With amazement the invaders saw a wooden automaton, almost life-size depicting the tiger, which savaged the British officer. In the torso of the beast was embedded mechanical organ, imitating the groans of the dying.

“Tiger Type” served as a kind of symbol of the independence mysource. Its creators was inspired by a real incident: the hunt ended unsuccessfully Lieutenant Hugh Munro.
Baby clockwork toys industrial production

At the turn of XIX–XX centuries, when mechanical toys began to be produced industrially, they finally fell into the hands of children. Now such joy could give to your child and relatively poor parents. 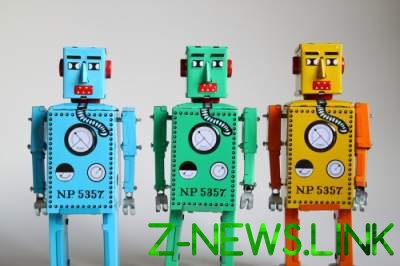 German and Japanese mechanical toys from the collection of the St. Petersburg Museum of toys.

In the USSR clockwork toys began to produce industrial way in the 1930-ies. This was done, Moscow artel: “Stanislaski” when Univeral and “KIM”. Mechanical toys and games was done in specialized plants from the waste products of heavy industry, in particular in the factories of the “Northern press” in Leningrad and “Press” in Serpukhov.

In the 30s, more precisely, in 1932, the Japanese engineers have designed the first robot, and in this case the interests of scientists and children coincide. 15-inch “Lilliput”, “know how” to walk, distinguished by a futuristic design.

Modern toy robots, copies of the Japanese robot “Lilliput” in 1932.

A few centuries later, the robot will be one of the most popular toys. But the children of the 30’s brought the keys are mostly rather primitive cars, and the Soviet guys — and even small tractors. 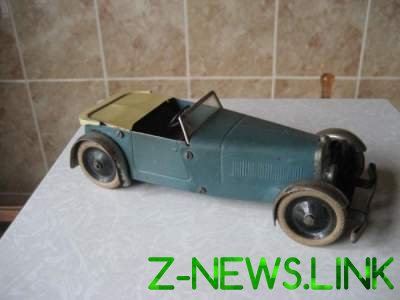 Pre-war clockwork car, made in Leningrad.

In the 50s in large quantities were produced of tin frogs, ducks, chickens, Canaries. Bird bent down as if pecking the grain. They slightly resembled its old prototype, the Duck of Vaucanson, although the most likely to drink and could not eat.

More complex in design and construction, but was more expensive toys on the theme of circus and popular in the 50s — 60s.

About the 60’s and reminiscent of the old plush wind-up toy: bear with barrel of honey, a balalaika or Khokhloma wooden spoon, monkeys, dogs. They were soft to the touch, although the frame was still rigid.

In the 80s interest in clockwork toys were gradually lost. But in recent years he returned, despite all the variety on the shelves and in children’s stores.

However, today, mechanics do not get tired to surprise the audience.