Home / WORLD / ‘It has run its course’: Fans in hysterics as Premier League football aces forget to take a knee and crash into each other (VIDEO)

‘It has run its course’: Fans in hysterics as Premier League football aces forget to take a knee and crash into each other (VIDEO) 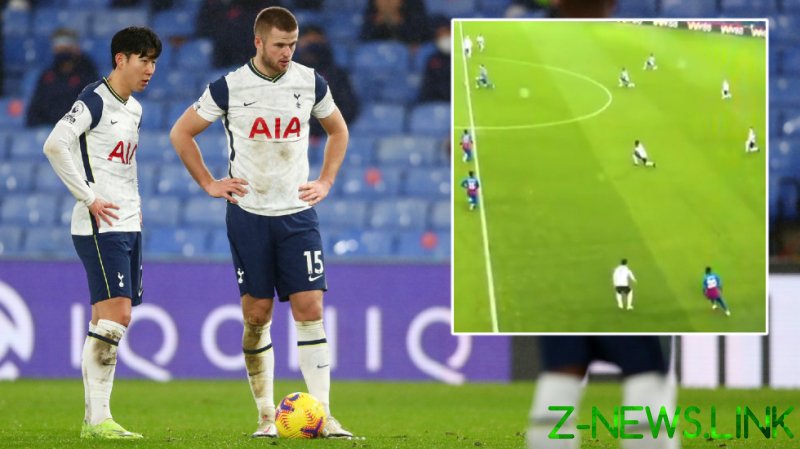 Belgium forward Benteke and Son, the Premier League’s second-top scorer, tangled as the referee blew his whistle to signal the taking of the knee before the match between Tottenham and Palace at Selhurst Park on Sunday.

Thinking the game had started, Benteke flew forwards in an attempt to immediately move towards a potential goalscoring position, causing Son to react by attempting to block his path.

The confused duo then realized that the rest of the players had knelt when the whistle sounded, attempting to atone for their error by sinking to the turf themselves.

Unfortunately for Benteke, the 6ft 2in targetman was inside the opposition half by then, causing him to unceremoniously try to sneak back towards his own territory in line with the rules at kick-off.

When his embarrassment got the better of him and he realized that the time had passed in which he could smoothly return beyond the halfway line, Benteke crouched slightly inside the Spurs half, ahead of the equally bemused Son.

The fiasco did not go unnoticed in front of the first crowd to have been allowed in to Palace’s stadium since the onset of the pandemic halted elite football in England in March.

Some viewers at home captured the moment, which was live on television, for posterity, laughing disbelievingly as the act of symbolism, which has been at the center of increasing contention during the past week, took on a lighter air.

“Just highlights it has run its course,” said one supporter on Twitter, recalling how Liverpool striker Sadio Mane had previously seemed more focused on football than kneeling. “Action is required now.”

Mane became the first high-profile Premier League star to fluff his lines when he ran into the opposition half before kick-off at Everton’s Goodison Park in June, enduring predictable mockery from fans for his troubles.

Manchester United’s Anthony Martial then also made a false start at the same stadium last month, advancing as the whistle blew before hurriedly backtracking to his initial position.

In a response that could have been spoofing the ready outrage among those keen to insist that the knee is taken, another watcher replied: “Hopefully both get a lengthy ban – disgusting.”

Neither Benteke nor Son made reference to the hilarious mishap after the match, which ended in a 1-1 draw.