‘It could have a different shape potentially’: Musk mocks Bezos’ phallic rocket after dismissing rival’s complaint 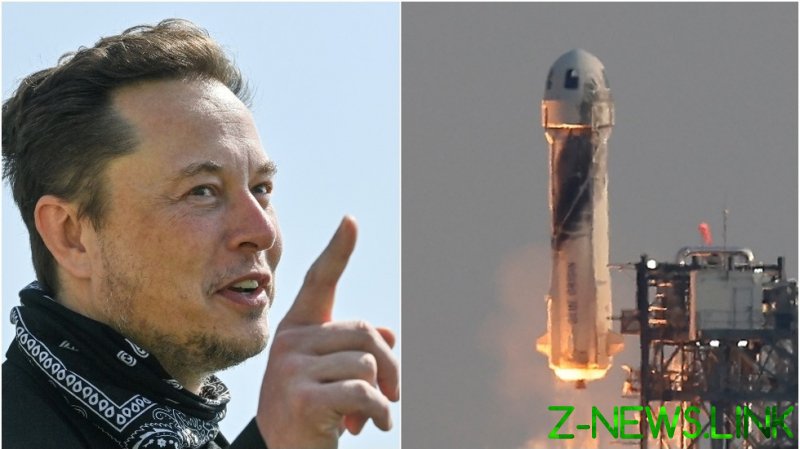 At the Code Conference on Tuesday, journalist Kara Swisher asked Musk about the complaints over competing satellite-based internet plans that Bezos’ Blue Origin filed to the Federal Communications Commission (FCC) against SpaceX.

“I think he should put more energy in getting to orbit than lawsuits,” Musk replied, drawing loud laugher from the audience.

You cannot sue your way to the Moon no matter how good your lawyers are.

Amazon and its satellite-broadband subsidiary, Kuiper Systems, argue that SpaceX broke FCC rules by proposing two separate configurations for the nearly 30,000 satellites of its second-generation Starlink system. In August, Blue Origin sued NASA after it lost a government contract to put astronauts on the Moon to SpaceX. The lawsuit delayed SpcaeX’s work on the project.

The interviewer remarked that businessmen “make fun of each other’s rockets,” apparently alluding to the phallic shape of Bezos’ New Shepard rocket, whose successful flight this year unleashed a torrent of jokes and memes online.

“I think it does have… I mean it could be a different shape potentially, you know,” the billionaire replied, bursting into laughter.

When Swisher asked to explain why a rocket would be shaped like that, Musk said, “If you’re only going suborbital, your rocket can be shorter, yes.”

Musk’s answer was similar to the explanation given by NASA propulsion engineer Daniel Ramspacher in an interview with Slate in July. “They knew they weren’t going into orbit, so they sized the [fuel] tanks appropriately, and it’s a relatively small diameter. They designed the capsule for the next series of rockets. They didn’t want to make the tanks too large,” he said of the New Shepard’s phallic stature.

On July 11, UK tycoon Richard Branson conducted a suborbital flight aboard his Virgin Galactic rocket plane. A week later, New Shepard completed its first crewed mission with four people on board, including Jeff Bezos and his brother Mark.

SpaceX has launched three astronaut crews into space since May 2020. This month, Musk’s company safely launched and returned an all-tourist crew of four passengers, although Musk himself stayed on the ground.

Speaking at the Code Conference, Musk said he will also put on a spacesuit at some point. “But my goal is not to send myself up. My goal is to open up space for humanity and ultimately set us on a path to becoming a space-faring civilization and a multiplanet species.”