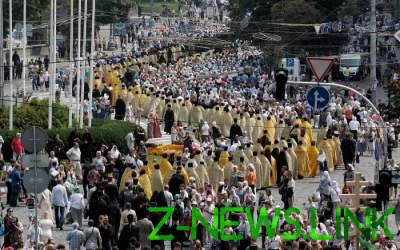 July 27-28 believers 1030 Ukrainians celebrate anniversary of baptism of Kievan Rus. So, in the Central streets of the capital in honor of the holiday will be prayers and religious processions. This will partially block the movement of the transport 24, 27 and 28 July.

According to the presidential decree of Ukraine from August 8, 2017 “on measures On preparation and celebration 1030-anniversary of the Baptism of Kievan Rus-Ukraine” prepared a series of events and prayer services.

It is worth noting that in addition to a solemn prayer in all districts of Kiev will be held a festive event, which would affect educational and research institutions. Besides, on July 27-28 in the capital held prayer services and processions processions of parishioners of the Ukrainian Orthodox Church-Kyivan Patriarchate, and the adherents of the UOC of the Moscow Patriarchate.

July 28 at 11:30 will be the sign of the Cross procession – Prayer for Ukraine and for a United Ukrainian Orthodox Church. Route: St. Vladimir Cathedral – the Boulevard Shevchenko – Volodymyrska street – Sophia square – Mikhailovskaya square Park Vladimirskaya Gorka.

The Moscow Patriarchate is planning to organize a procession to St. Vladimir’s hill on July 27. Metropolitan of the UOC-MP Onufry will also hold a worship service on July 28 near the Kiev-Pechersk Lavra.

Andrew’s descent (from house No. 23 to the streets of Vladimir),

the street of the tithes (from Vladimirskaya St. to the square St. Michael),

the three saints street (from street to European square),

to the street Khreshchatyk (from the street street to European square),

Park road (from Avenue of Heroes to the streets of Hrushevsky),

Vladimirskaya street (from house number 56 to the streets of Sofia),