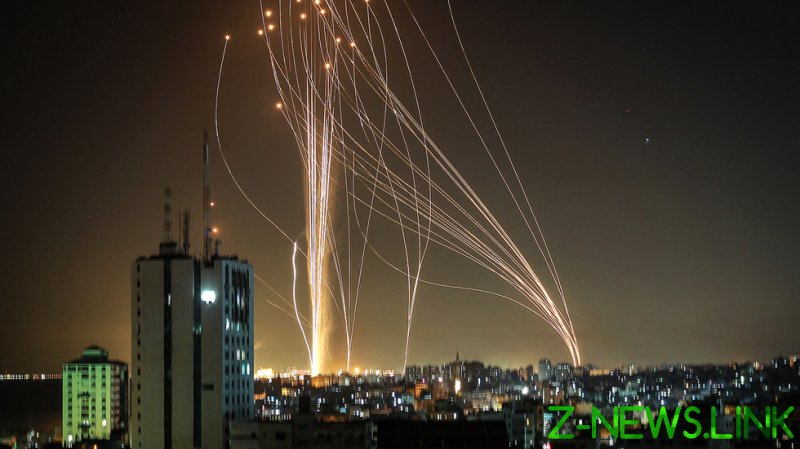 According to regional media, at least 130 rockets have been fired from Gaza on Tuesday evening, targeting Tel Aviv and other Israeli cities. Al-Qassam Brigades, the military wing of Hamas, launched “hundreds” of rockets, the Gaza-based Shehab news agency reported.

Palestinians said the barrage is a response to the destruction of Hanadi tower, a residential complex in Gaza, by Israeli bombardment earlier in the day.

“If the enemy persists and bombs civilian towers, Tel Aviv will be on a date with a harsh missile strike that exceeds what happened in Ashkelon,” Al-Qassam spokesman Abu Ubayda said on Tuesday, according to local media.

Hamas claimed to have killed two Israelis and injured many more in rocket strikes on Ashkelon and Ashdod earlier in the day. Meanwhile, the ministry of health in Hamas-run Gaza reported that 28 people have been killed – including 10 children – and 152 were injured in Israeli bombings as of Tuesday afternoon.

RT’s Paula Slier reported that the strike on Holon, a southern suburb of Tel Aviv, hit a bus.

Israeli Channel 12 showed black smoke billowing over Tel Aviv, while a photo of a burning bus has also made rounds on social media.

A video from Holon also captured the moment of the explosion.

Another rocket reportedly hit the suburb of Rishon Letzion, further south. All flights have been suspended at Tel Aviv’s Ben Gurion International Airport, and planes are being diverted to Cyprus, the Civil Aviation Authority said.

The government in Tel Aviv has confirmed that two people were killed in Ashkelon and more than 30 wounded across southern Israel, as the Iron Dome missile defense apparently struggled to cope with the sheer volume of rockets from Gaza.

Prime Minister Benjamin Netanyahu said that air strikes against Gaza will be increased in “both strength and frequency” due to the rocket barrage that began Monday.

Hamas and other groups in the Gaza Strip began launching rockets after Monday’s blaze outside the Al-Aqsa mosque on Jerusalem’s Temple Mount. A tree caught fire amid clashes between Israeli police and Palestinians protesting evictions from the Jerusalem neighborhood of Sheikh Jarrah.