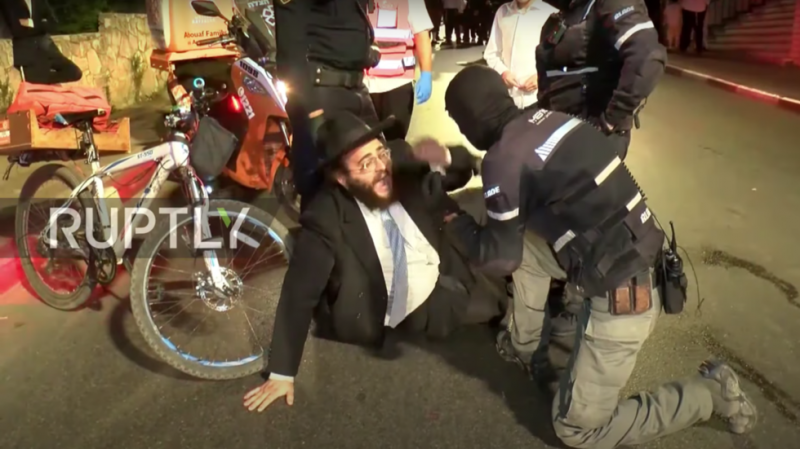 Hundreds of people in the ultra-Orthodox city of Bnei Brak defied the latest ban on gatherings in enclosed spaces and restriction of outdoor prayers to groups of 20 or less on Sunday.

When the officers arrived and started slapping violators with fines for not wearing masks or ‘social-distancing’, some of them “began resisting and disturbing public order,” resulting in chaotic scuffles according to multiple videos shared online.

Despite police efforts to break up the gathering and at least 13 arrests, worshippers kept gathering at the synagogue, according to the Times of Israel. Authorities faced accusations of excessive force as cops were filmed pushing and shoving people to the ground.

Clashes also broke out in the ultra-Orthodox Mea Shearim neighborhood of Jerusalem, where police arrested at least four people for “blocking traffic and burning trash.”

Israel’s second coronavirus lockdown went into effect on September 18 as the country saw a surge in new infections. As of Sunday, Israel’s death toll attributed to coronavirus stood at 1,719 fatalities out of some 267,000 recorded Covid-19 cases. The rate of infections in the ultra-Orthodox community was estimated to be more than two times the national average.

Besides fines for violating tough restrictions on public gatherings and meetings with non-close family members, Israelis were also banned from holding demonstrations more than 1km from their homes. The measure, however, failed to stop mass weekly anti-government protests, which instead morphed into a series of smaller ‘socially-distanced’ rallies this weekend.