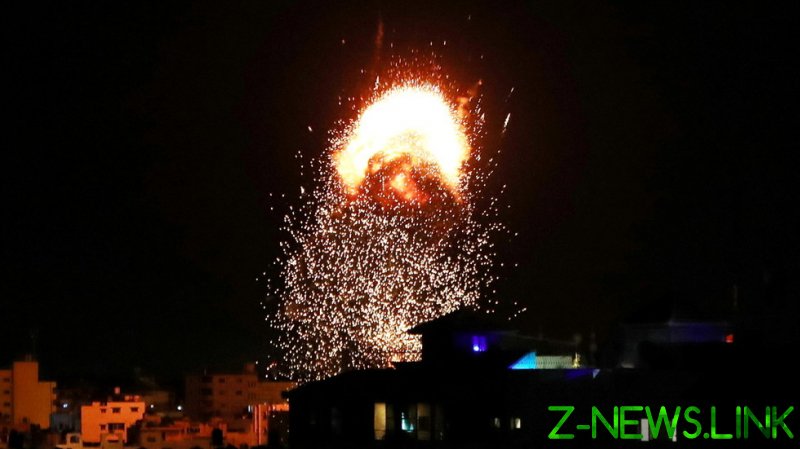 The Israeli Defense Forces (IDF) hit buildings near Al-Qatiba Square in the western part of Gaza, according to the Jerusalem Post, while local reports suggested that an office for Palestinian Prisoners’ Affairs was targeted, as well as agricultural lands.

Footage purporting to show the bombardment and its aftermath has been shared on social media.

The strikes come amid mounting tensions between Tel Aviv and the Hamas government of Gaza, which have ratcheted up after violent clashes in Jerusalem where Palestinians protested against eviction of several local families last week. Since then, Israel has blamed the Gaza-based group for firing some 3,350 rockets towards Israeli territory, and responded with raids of its own, which have so far claimed 212 lives, the Gaza Health Ministry reported on Monday. The bombing campaign has left some 1,400 Palestinians wounded, and forced some 40,000 families to flee their homes, according to the ministry. A recent raid that struck a building of the local health ministry has also reportedly affected the enclave’s main laboratory, bringing Covid-19 testing and vaccinations to a virtual halt.

While US President Joe Biden backed a proposed ceasefire in a call with Israeli PM Benjamin Netanyahu on Monday, he nevertheless reiterated Washington’s steadfast support for Tel Aviv.

Although Biden’s Secretary of State Tony Blinken claimed that the US administration is “working behind the scenes” to secure a truce, the Netanyahu government has shown no intention of stopping the bombing bonanza, expressing gratitude to Washington for torpedoing yet another attempt by the UN Security Council to adopt a statement calling for the cessation of hostilities on Monday.

The statement, drafted jointly by China, Tunisia and Norway, was the UN body’s third attempt to advance such a document in a week – with the previous efforts also blocked by Washington. The draft, as cited by AFP, stressed the need to diffuse tensions and urged “respect for international humanitarian law, including the protection of civilians, especially children.” The draft also referred to a potential expulsion of Palestinian families from the Israeli-occupied East Jerusalem as “serious concern” that might fuel tensions and cited the right of Muslim worshipers to pray in Al-Aqsa Mosque. It’s unclear why the Biden administration refused to endorse the statement, which also called for a ‘two-state solution’ for the long-running dispute.

The US refusal to back the UNSC statement drew praise from Tel Aviv, with Israeli Defense Ministry Benny Gantz extending his “sincere thanks to the US administration” for “rightly preventing the unjust UN Security Council statement criticizing Israel’s actions in Gaza.”

“This criticism of Israel is hypocritical and detrimental to the global fight against terror,” Gantz added, arguing that Israel’s goal is “solely to dismantle terror infrastructure and protect our people.”

In Israel, at least ten people, including two children, were reported killed in the attacks, as well as 50 injured.