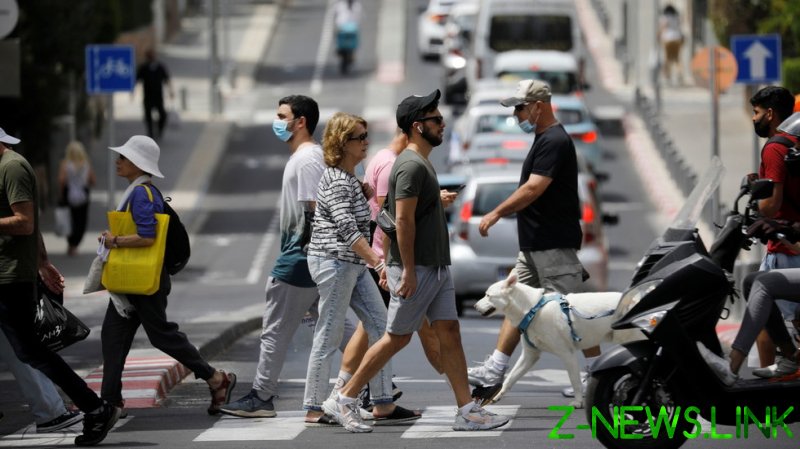 On June 1, the Jewish state already lifted most of the Covid-19-related rules that plagued its economy for more than a year by removing a cap on gatherings and allowing restaurants, stores and other similar businesses to operate without any restrictions. The Israelis are also no longer required to present their ‘vaccine passports’ to attend certain cultural and sporting events.

The removal of the indoor mask requirement comes as Israel has fully vaccinated almost 60 percent of its population. The nation of 9 million saw over 5 million people receiving their second jab by Sunday, according to the government data. Sunday was also the first day when Israel recorded no new domestic cases of Covid-19, four new infections reported over the last 24 hours all originated abroad, the Israeli media said.

“If the morbidity remains low until June 15, we will allow masks to be removed even indoors,” Edelstein said on Sunday during a ceremony honoring health workers, adding that “this is a reality we did not expect to reach at this point, and we made it.”

PM Benjamin Netanyahu, for his part, praised the speed of the vaccination rollout as well.

“This is what victory looks like – hundreds of Israelis sit in confined spaces with masks on and enjoy it. We went back to smiling. Israel smiles because Israel wins,” Netanyahu said at the ceremony, as cited by Ynet news.

The number of new cases dropped to single digits in Israel on June 1. The number of active cases also continues to decrease and fell down to 221, including 38 seriously ill, on Sunday, according to the government data.

Schools will still be covered by the indoors mask requirement even after June 15, the officials said as children under 16 have yet to be vaccinated. Students would have to continue to wear masks in class as Israel starts a campaign to vaccinate children aged between 12 and 16. If it is successful, the government would consider lifting this requirement as well in the coming weeks.

Curbs on air travel will also remain in place. International arrivals will still be required to produce negative coronavirus tests, taken before and after landing. Those coming to Israel will also have to go into quarantine for at least 10 days upon arrival if they do not present a valid vaccination or recovery certification issued by the Israeli Ministry of Health.