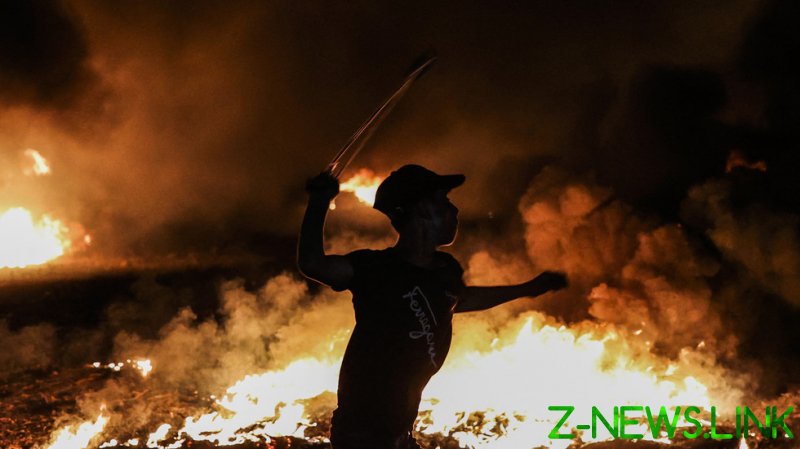 The Israel Defense Forces (IDF) said the attacks south of Gaza City targeted a military compound of Hamas and a “terrorist tunnel entrance.”

“Hamas terrorists were launching arson balloons” and instigating violence along the border with one purpose, which is “to terrorize Israeli citizens,” the IDF said, vowing to protect the Jewish State’s population.

There has so far been no information about casualties or destruction caused by the Israeli airstrikes in the enclave.

After dark, the ‘night confusion units’ descended upon the border between Gaza and Israel; Palestinian youths burnt tires, hurled foreign objects at IDF troops, while also playing records of rocket alert sirens in an attempt to cause panic among Israelis in the border area.

Israeli troops responded with force. The Gaza Health Ministry reported that at least 11 Palestinians were injured in the clashes. Three of the wounded were hit with live fire and are now in moderate condition, according to the Health Ministry, while the rest were hurt by rubber bullets and shock grenades.

Similar protests took place at the border last Saturday and on Wednesday. The ‘night confusion units’ behind them aren’t officially linked to Hamas, but Israeli officials insist that they would not have been able to act without the group’s approval.

Hamas has warned that arson balloon attacks and border violence may escalate if Israel doesn’t lift the blockade it imposed on Gaza after the most serious flare-up in years between the two sides this May.

At that time, an 11-day exchange of fire between the IDF and Hamas resulted in the death of more than 254 people in Gaza, including 66 children, according to the UN. In Israel, 12 people, including two children, were killed by rockets coming from Gaza.

Earlier this week, Israel eased some of the restrictions, permitting more goods to enter Gaza and allowing 1,000 vaccinated Palestinian workers to travel into Israeli territory.

Hamas, however, wants the blockade completely lifted, including the unfreezing of subsidies received by the enclave from Qatar. Israel has conditioned the easing of restrictions on the “continued preservation of security stability for the long term” by the group.