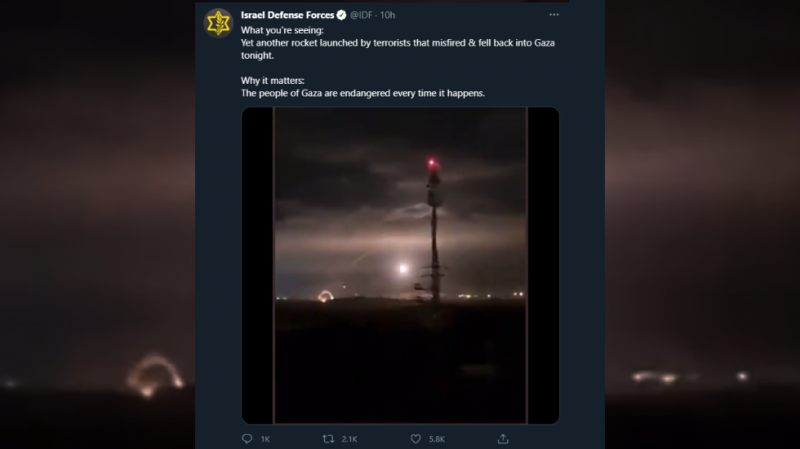 In a tweet in the early hours of Thursday morning, the Israel Defense Forces (IDF) posted a video accompanied by the comment, “The people of Gaza are endangered every time it happens.”

This is not the first time the IDF has attempted to show the people of Gaza are endangered by Hamas’ malfunctioning operations. On Monday, the IDF claimed 460 of Hamas’s 3,150 rockets had misfired.

Posts earlier this week claimed that 15% percent of Hamas launches were landing in Gaza. “It’s time for the world to hold Hamas accountable,” another tweet read.

Media coverage of the conflict between Jerusalem and the Palestinian militant group has often focused on the casualties of Israel’s aerial bombardment. Health officials in Gaza say 228 residents have been killed since the fighting began on May 10. Israeli authorities say 12 people have died in Israel, with the majority of Hamas rockets having been intercepted by Jerusalem’s Iron Dome defense capability.

High-profile celebrities such as Bella Hadid, a supermodel of Palestinian descent, have expressed their condemnation of Israel’s occupation and its ongoing campaign. “It’s free Palestine til Palestine is free!!!” she wrote, after attending a rally in New York on Saturday. Last week, Pink Floyd co-founder Roger Waters told RT the world must pressurize Israel to end its “murderous attack on Gaza.”

However, Israel has not been without high-profile support itself. Last Wednesday, ‘Wonder Woman’ star and former Miss Israel winner Gal Gadot took to Twitter, saying, “Israel deserves to live as a free and safe nation.” She added that Israel’s “neighbors” deserved the same.

Conflict erupted last week following heated protests over the eviction of Palestinian residents of East Jerusalem. The demonstrations prompted a harsh crackdown by the Israeli security forces, with hundreds injured in the ensuing clashes. A raid by Israeli police on the Al-Aqsa mosque, one of the holiest sites in Islam, on one of the holiest days in the Islamic calendar, served as a trigger for broader conflict, with Hamas responding by firing rockets from Gaza at targets in Israel.

As the human cost of the war grows, international calls for a truce have gone largely unanswered. Asked on Israel’s Kan state radio if a ceasefire would begin on Friday, Intelligence Minister Eli Cohen said, “No. We are definitely seeing very significant international pressure … We will finish the operation when we decide we have attained our goals.”