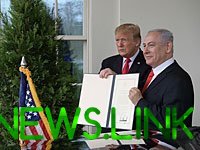 Published in the framework of the information campaign. Text provided by the Likud party.

Only Prime Minister Benjamin Netanyahu so clearly understands the link between economic development and military power of the country, and the combination of these two factors allows Israel to build the third component of the success of our country, the foreign power.

“Stefan Zweig in his time wrote about the end times, perished yesterday, about the world, which collapsed, says Netanyahu in an interview with the newspaper “Israel a-Yom” – but it’s exactly the opposite, that’s another story: we have turned Israel into the growing world power with a thriving economy, powerful security and reliable governance, we have proved that Israel can be transformed from a tiny country located in the bear corner of the Middle East, the power factor of world level”.

Says Netanyahu, along with Israel has changed the middle East; if it was believed that all the problems of the region stem from the Palestinian issue, today we are witnessing the impossible: a significant part of the Arab world is beginning to understand that Israel today is the most reliable bulwark in opposition to radical Islam, an embodiment of which is Iran. The Islamic Republic, whose expansion extends from sea to sea, threatens middle Eastern countries, who look with hope to Israel, realizing that his army is the only one who can save the region from the danger of death.

According to Netanyahu, this realization recently touched, and Europe.

Answering the question, did at one time, security for Israel, the confrontation between him and the then U.S. President Barack Obama, Netanyahu acknowledged that, of course, you can talk about a possible mismatch positions. But at the same time adds that despite this, we managed to reach agreement, which helped stabilize the security of Israel over the next years.

“In the end, in the presence of such a democracy as the United States, policy toward Israel is determined not only by the White house, but a combination of many factors, particularly public opinion and its reflection in the Congress and in the White house,” stressed Netanyahu. He believes that regardless of personal relationships between heads of state is hardly anything to interrupt the strong link between Israel and America. The coordination of their actions, at the level of military, intelligence, scientific and other, in any case, is carried out continuously. And this is especially important now, when Iran did not cease its attempts to create a “Shiite axis” that connects Tehran, Baghdad, Damascus and Beirut that is undoubtedly a threat to the existence of Israel.

In this sense, Netanyahu flatly rejects accusations that he and his government are peculiar to the artificial inflation of the “Iranian threat”. “A prerequisite for the existence of any government should be revealing barely emerging danger,” said Netanyahu. Unfortunately, in the history of our nation there are many examples where such improvidence led to tragic consequences. Like, say, in 1492, one of the brilliant Jewish sons, the leader of Spanish Jewry Isaac Abarbanel warned of the impending disaster, and this at a time when the situation of the Jews was what is called could not be better, but it took a little more time and was written a black page in the history of the Jews – expulsion from Spain. The same – centuries later – it was with the prophecies of ze’ev Jabotinsky, who warned that the Jews of Europe coming terrible disaster; but he was considered an alarmist. What happened then is well known.

“That Iran might represent for us serious threat, I realized in 1979 – says Netanyahu – and I even then it was clear that radical Islam will replace pan-Arabism of Nasser. But Iran some time was busy fighting with their neighbors – Iraq, and then continued to revolutionize the country, placing at the forefront the murderous and fanatical ideology. If the ruling regime of Iran will continue to focus on the production of nuclear weapons, then we can talk about an existential threat.”

According to Netanyahu, during the reign of Barack Obama’s Israel was on the verge of a serious confrontation with Iran. The U.S. administration is appreciated, realizing that we are not bluffing, says Prime Minister, but on a certain kind of reasons, it was decided to impose sanctions; to a large extent this was dictated by the attitude of Israel. Iran feel the pressure, and was ready to go back out, but there is a very “timely” arrived “nuclear deal”. It was assumed that Iran received billions as a result, the lifting of the sanctions will be a moderate country. Instead, he continued the arms race. “I only heard the President trump says Netanyahu – who decided to disavow a “nuclear deal” and to resume pressure on Iran. I believe that pressure, pressure and more pressure will lead to the desired result”.

A free economy – the key to power and prosperity

Of course, the growing threat from Iran requires new investments in the country’s defense. Is – billions and billions of shekels. Where to get such funds. Netanyahu thought that, first of all, developing a free economy and encouraging economic initiative. And to achieve advantages in comparison with other countries, it is necessary to a free economy.

“That’s why – looking back, I realize it – says Netanyahu – I have devoted a significant part of his public life the release of the Israeli economy, which has long been centralized, even semi-socialist, with a huge public sector that too much of a burden hanging on the shoulders of the private sector. When I took office as Prime Minister, a citizen of Israel could not withdraw more than a thousand or two thousand dollars, this required special permission from the Bank of Israel. Country start-UPS could work this way? I released the currency. I was dealing with a huge budget deficit, but did not run the printing press, but only properly prioritized. Yes, had to make sometimes unpopular measures, such as reducing benefits for children. But it then turned to economic growth. Understand that economic power determines military power. I, in particular, has set a goal to enter the top five cyber powers; the result is obvious: we managed to prevent the fifty most powerful cyber-attacks”.

Speaking about what he wanted to do more for the economy, Netanyahu stressed: “I see my mission is to completely liberate the Israeli economy, reducing the level of state regulation. According to the OECD index, we were by this indicator on one of the last places; then we were able to move up to fifteenth place, but I want Israel entered the top five. You can’t imagine how many Israelis will be happy with this circumstance. The owners of small businesses that suffer from excessive pressure and numerous legal obstacles, will feel truly free.”

According to Netanyahu, there is another motivation that drives him to action is the elimination of rocket attacks; and here, in his opinion, there is a solution, namely, to further the normalization of peaceful relations with the Arab world and the possible imminent settlement of the Israeli-Palestinian conflict.

“And if people trust me with running the country, I will conclude what I have to do,” says Benjamin Netanyahu.