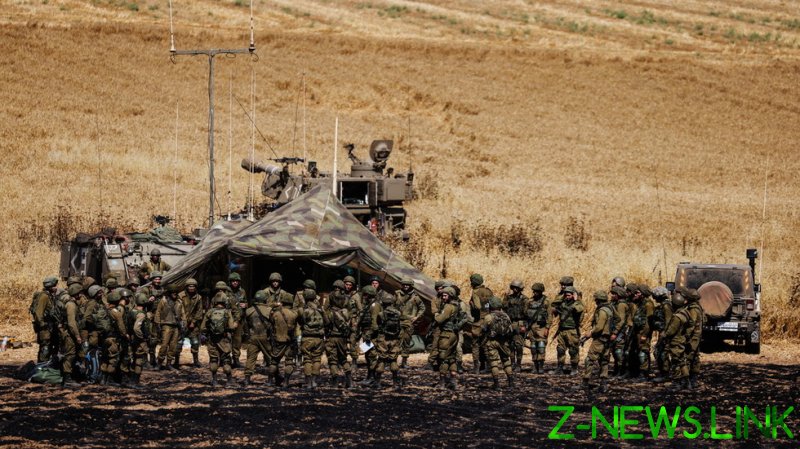 The Israel Defense Forces (IDF) clarified to AFP that its troops have not crossed into the Gaza Strip, blaming an “internal communication” error for the confusion. The Israeli army initially told the media that its soldiers were in the Palestinian enclave, but two hours later it sent a new statement saying there were “no soldiers” in Gaza, according to AFP.

Israeli media also reported that the IDF had denied launching a ground invasion of Gaza after originally giving the impression that it had done so. “There are currently no troops in the Gaza Strip,” an IDF spokesperson was quoted as saying.

The IDF said both air and ground forces had been used to strike multiple targets in Gaza that were linked to the Palestinian militant groups Hamas and Islamic Jihad, which have been firing rockets at Israeli cities. Some “160 aircraft, tanks, artillery and infantry units” were amassed along the Gazan border to participate in the operation against Hamas, the army said.

Around 2,000 rockets have been launched from Gaza into southern and central Israel since Monday, the IDF said. Some of them were intercepted and destroyed mid-air by the Iron Dome air defense missile system, but others fell on residential areas, killing seven civilians and forcing many more to hide in bomb shelters. The Times of Israel, meanwhile, said the Israeli death toll has grown to nine, including a 50-year-old woman who died after being seriously injured while rushing to a shelter.

On Friday, the IDF said three rockets were fired from Lebanon and fell into the Mediterranean Sea. Anti-Israel militant group Hezbollah and other small Palestinian groups are based in Lebanon.

Israel responded to the barrage from Gaza by dropping bombs on the enclave, which levelled several high-rise buildings and made large plumes of smoke rise above the densely populated city’s skyline. Although Israel says it only targets Hamas militants and their infrastructure, Gazan health officials reported that at least 119 Palestinians, including 27 children, were killed by IDF airstrikes.

The cross-border escalation was followed by a wave of Arab-Israeli street violence and rioting in several cities with mixed Arab-Israeli populations. A state of emergency was declared in the city of Lod, 15km of Tel Aviv, on Tuesday night, after three synagogues and numerous shops were burnt down.

According to Israeli media, another synagogue was set ablaze in Lod on Thursday night, and a 19-year-old Israeli soldier sustained a skull fracture and brain damage after being assaulted in Jaffa.

The violence was preceded by tensions in East Jerusalem, which culminated in clashes between Palestinians and the Israeli police at the Al-Aqsa Mosque compound in Jerusalem’s Old City.