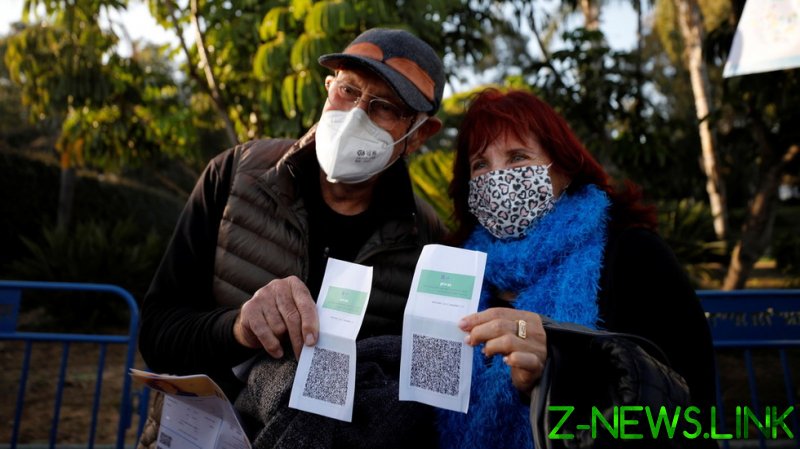 Under the new rules that came into force on Sunday, the Green Passes of all Israelis were to become void, with citizens being told to re-register on the system to maintain their access to public venues, including restaurants and gyms.

However, there was a catch: only those who had received their third, booster shot, or who’d had their second jab within the past six months, would have been eligible to renew, meaning between 1.5 and 1.7 million people would have lost their Green Pass privileges.

In early August, Israel became one of the first countries in the world to launch a booster campaign, and has already inoculated more than three million of its citizens with the third shot.

Many of those people rushed to the special website set up by the Health Ministry to get their new Green Passes, but they were met with a message saying the page was undergoing maintenance. The system worked for only a few hours early on Sunday morning before crashing due to the massive number of pass requests, local media reported.

After some time, the Health Ministry issued a statement saying the old Green Passes would remain valid “for the next few days.” It’s currently unclear when the system will be back online.

Even members of the Israeli government were affected, with Construction and Housing Minister Ze’ev Elkin blaming the Health Ministry for creating the “mess.”

“I didn’t download my new pass because the website doesn’t work,” Elkin complained to Israeli national public broadcaster Kan, adding that the switch should have been executed in a more “orderly manner.”

The issue is certain to be on the agenda of the cabinet’s coronavirus meeting, chaired by Prime Minister Naftali Bennett, which is scheduled for later on Sunday.

Israel has so recorded more than 1.29 million infections and 7,778 deaths since the start of the Covid-19 pandemic. It experienced a spike in cases in the summer, due to the emergence of the more contagious Delta variant, but Health Ministry Director-General Nachman Ash insisted earlier this week, “The fourth wave [of the coronavirus] is coming to an end.”

According to the ministry’s figures, the daily caseload stood at 3,854 this week, falling almost two-fold from mid-September. Due to the positive trend, health officials will not be asking the government to introduce any new restrictions, Ash said.