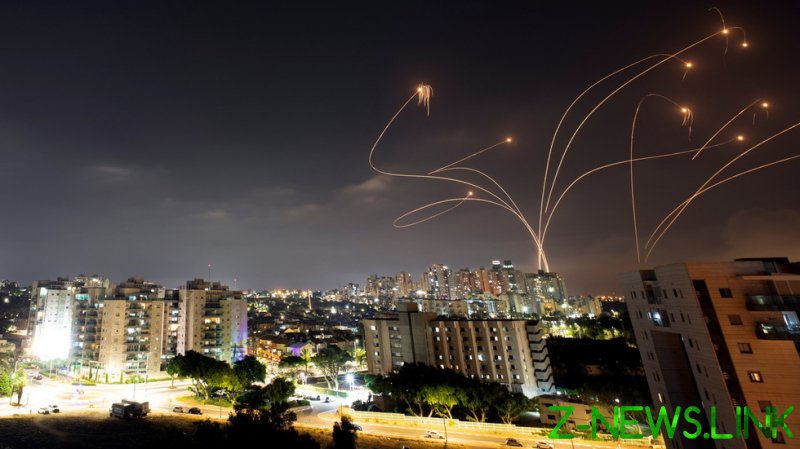 The Israeli Defense Forces (IDF) shared footage of some of the air strikes late on Monday night, claiming to have hit a number of Hamas targets around the Gaza Strip, including eight militants, two rocket launchers and two military outposts. The Gaza Health Ministry, meanwhile, put the death toll at 20, among them 9 children, in addition to 95 wounded.

The IDF said the sorties were a response to over 150 rockets fired from Gaza on Monday evening, noting that one strike involving an anti-tank missile also left an Israeli citizen “lightly injured” and in need of medical treatment. The Islamic Jihad militant group reportedly took responsibility for the tank-missile, while Hamas claimed several rocket strikes.

The military shared a video of one rocket “barrage” in Ashkelon, showing Israel’s Iron Dome defenses intercept a number of projectiles mid-flight.

The IDF’s international spokesman Jonathan Conricus said the rockets largely targeted areas in southern Israel adjacent to Gaza, calling the strikes a “severe attack against Israel” that “will not go unanswered.” Another spokesperson, Brigadier General Hidai Zilberman, said rockets were also fired toward Jerusalem, adding that Tel Aviv’s response would “not last several minutes, but days.”

Other footage and photos purporting to show the Israeli strikes have also circulated online, with one graphic clip said to depict the aftermath of an air raid on a crowded street.

The spike in violence comes amid days of unrest over planned home evictions of Palestinian residents in the Sheikh Jarrah neighborhood of East Jerusalem, prompting a string of protests around the city. The demonstrations have been repeatedly dispersed by Israeli security forces, seeing hundreds injured in the resulting clashes over the weekend.

According to the Red Crescent, more than 330 Palestinians were wounded on Monday after police cracked down on a large crowd of worshippers gathered at Al Aqsa mosque, the third holiest site in Islam, where security forces were seen using shock grenades and tear gas to disperse the group. A fire was also ignited near the mosque, though the structure itself was not damaged.

While massive crowds typically travel to Al Aqsa for Ramadan, Israeli authorities have imposed a 10,000-person limit on the site, pointing to concerns over Covid-19. Tens of thousands of Muslim worshippers have been turned away as a result, while some deemed “suspicious” by Israeli police have also been detained, further fueling tensions. 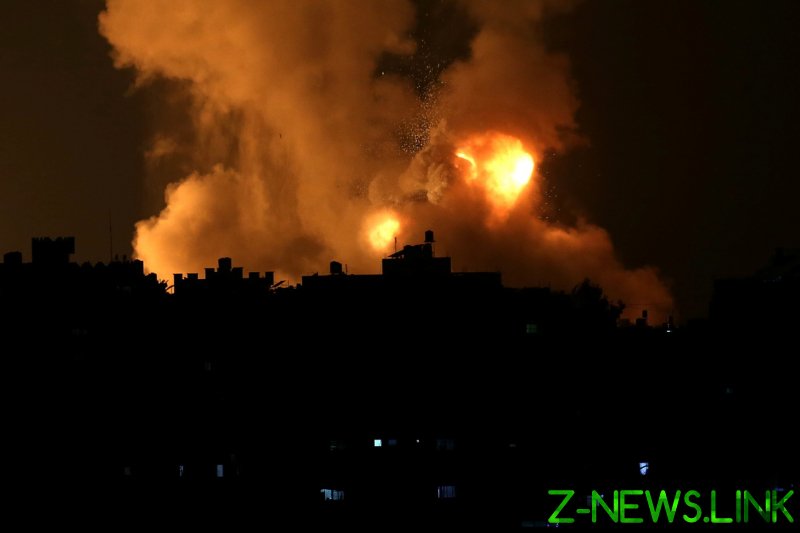 Flames rise from a building in the Gaza Strip after an Israeli air strike, amid a flare-up of violence over planned evictions in East Jerusalem, May 10, 2021. ©  Reuters / Ibraheem Abu Mustafa

The unrest prompted the Israeli government to temporarily bar its citizens from traveling to the Temple Mount, a major holy site for Judaism, Islam and Christianity which contains Al Aqsa, known to Muslims as Haram esh-Sharif. The move coincided with Jerusalem Day, when Israel commemorates its capture of East Jerusalem during the Six Day War in 1967. Though the holiday typically sees a customary “flag parade” through the city, the government decided the risk of violence was too high and shifted the route of the march. Some Israeli groups, angered by the decision, say they still intend to hold the march along its original path, however.

Speaking at an event in the city to mark the holiday, Israeli Prime Minister Benjamin Netanyahu acknowledged the eruption of violence, vowing to inflict a “heavy price” on those launching rockets.

“We are in a fight on several fronts: Jerusalem, Gaza and elsewhere in the country,” he said. “This evening, on Jerusalem Day, the terrorist organizations in Gaza have crossed a red line and attacked us with missiles in the outskirts of Jerusalem.”

Israel will respond with great force. We will not tolerate attacks on our territory, on our capital, on our citizens and on our soldiers. Whoever attacks us will pay a heavy price.

Along with the West Bank, East Jerusalem has remained under Israeli military occupation since 1967. Jewish settlements have increasingly encroached into the territories, seeing thousands of Palestinians forced from their homes, often with support from the IDF. The United Nations has repeatedly condemned the settlements as violations of international law, which bars nations from taking land by conquest.