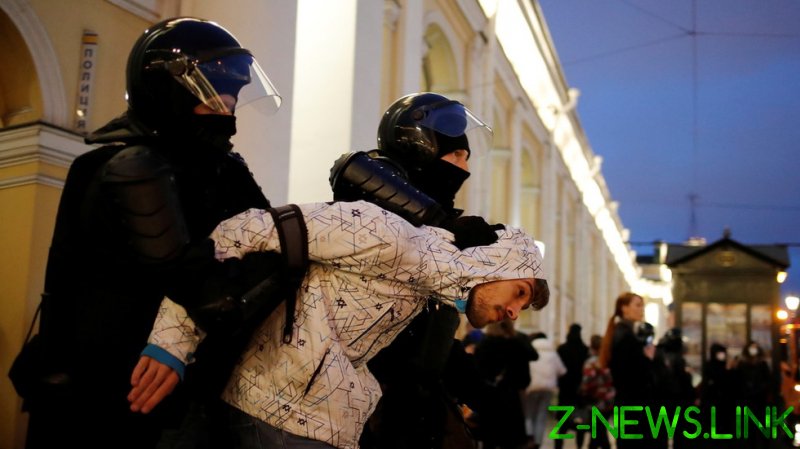 While organizers have not yet released their estimates of attendance at the actions, held in cities across the country, Russia’s Interior Ministry claims around 14,400 people were involved in the gatherings. They say crowds ranged in size from 6,000 in Moscow to only 40 people in the Far East city of Magadan, according to official numbers.

Estimates from Russian media organisations suggest the real attendance was considerably higher. Some suggested that between 10,000 and 15,000 turned up to the Moscow event.

Nevertheless, this would mean pickets were significantly smaller than the large-scale protests held in January, when Navalny was arrested after arriving back in the country from Berlin. He had been receiving treatment for what he and his doctors claim was a poisoning with the nerve agent Novichok. He has since been jailed for breaching the terms of a suspended sentence for fraud.

OVD-Info, an opposition-linked rights group that has received Western funding in the past, claimed that at least 1,000 people had been detained, including over 300 in Saint Petersburg.

The ‘Free Navalny’ website had attracted more than 466,000 signatures from those claiming they would be interested in attending the protests with the stated aim of “defending Alexey and our right to freedom and happiness.” However, the efforts were marred by claims that anyone could sign up from anywhere in the world, many using false details. Last week, the database of email addresses was leaked online in a massive data breach, which organizers were forced to apologize for.

Wednesday’s rallies were held over concerns for Navalny’s health. The anti-corruption campaigner announced on March 31 that he would begin a hunger strike, and claims he has not eaten since. He insists he has been prevented from seeing his personal doctors for leg and back pain. It is not customary for inmates in Russian penal colonies to choose their physicians, and the country’s human rights watchdog, Tatyana Moskalkova, told reporters earlier on Wednesday that he had been seen by four separate medics, who are providing him with nutrients through an intravenous drip.

The protestors, many shouting anti-Kremlin slogans, demanded Navalny be released from prison. In Moscow, police manned barricades, as some demonstrators staged performance art spectacles and were able to leave for the city’s outskirts as night fell.

Among those joining the demonstrations in the capital were Oleg Navalny, the campaigner’s brother, and Yulia Navalnaya, his wife.

However, clashes between police and protesters broke out in St. Petersburg, Russia’s second-largest city, and footage emerged of officers clad in riot gear chasing down and apprehending a small number of activists. In clips posted online, cops could be seen detaining members of the crowd.

The city, on the Baltic coast, saw some of the most violent incidents during January’s protests, including a demonstrator punching a security official in an unprovoked attack, and an officer kicking over an elderly woman.

Unauthorized mass gatherings are currently banned under rules put in place since the start of the Covid-19 pandemic. A number of Navalny’s allies have been arrested and face investigations for breaching these measures. Two of his most prominent supporters, Lubov Sobol and Kira Yarmysh, were arrested on the morning of the planned protests. Sobol has since reportedly been released.