Home / WORLD / Is Zelensky the new Saakashvili? Western armchair revolutionaries are now making the same mistake in Ukraine they did in Georgia

Is Zelensky the new Saakashvili? Western armchair revolutionaries are now making the same mistake in Ukraine they did in Georgia 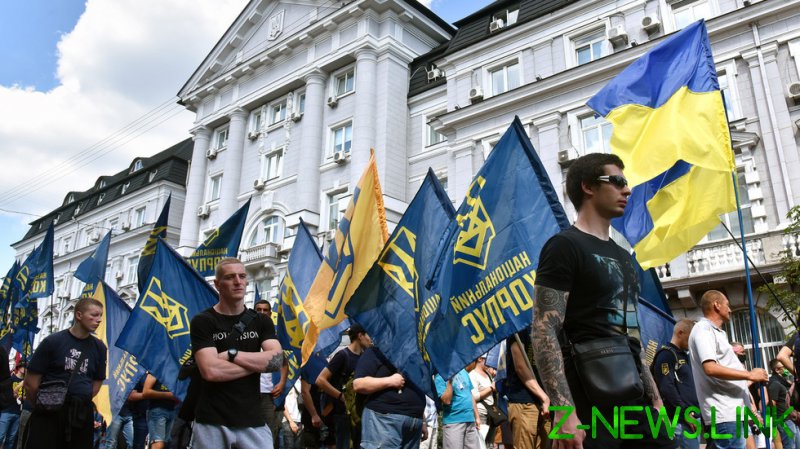 In a recent article, ‘Ukraine’s Dangerous Success’, veteran Moscow critic Edward Lucas argued that “Ukraine’s almost unimaginable progress since 1991 is a nightmare for Russia.” The crux of his argument is that the country’s stance toward Ukraine is not dictated by Kiev’s domestic anti-Kremlin posture. Russia, he says, is fearful that the success of Ukraine can undermine the country’s legitimacy at home.

The argument is almost identical to that of an article written two months earlier by Arseniy Yatsenyuk, Ukraine’s former prime minister. Yatsenyuk argues that NATO expansionism is not driving Russia away from the West, but that failure to expand the bloc will be a victory for President Vladimir Putin.

“In order not to lose Russia forever, the West must do everything possible and more to integrate Ukraine and other countries in our region into a United Europe, and therefore into NATO and the EU,” he wrote. “This is exactly what Mr. Putin fears because Ukraine’s freedom means something more than our national interests. It proves that Russia too can be free and that Putin is not indispensable.”

Lucas is a journalist turned lobbyist, working as a senior fellow at CEPA, a pressure group which promotes American interests in Eastern Europe. It has received funding from the US State Department and a number of defense contractors, such as Raytheon and Lockheed Martin. Yatsenyuk was chosen by Washington to lead Ukraine several weeks before the US-backed 2014 coup, which was revealed in a leaked phone call between Assistant Secretary of State Victoria Nuland and the American Ambassador to Ukraine Geoffrey Pyatt.

Kiev is losing its foreign sponsors

The crisis in Ukraine derives from the zero-sum security architecture in Europe, which compelled Kiev to align itself either with the West or with Russia. The ‘civilizational choice’ imposed on the country by the West has fragmented a deep divide in its society, which its leaders are now responding to with a crackdown on the political opposition, the media and protesters that are deemed not negative enough about Russia. The terms imposed on Ukraine by the US implies a pathway to NATO expansion that Russia deems to be an existential threat, and Moscow has responded by upholding clear red lines.

Recognizing the failure of the zero-sum approach to Ukraine, several Western powers have begun distancing themselves from the country and walking back the prospect of EU and NATO membership.

Neither Washington nor Kiev want the return of the Donbass region to Ukraine under the conditions outlined in the Minsk Agreement, and instead have spent the past few years sanctioning Russia and arming Ukraine in the hopes of renegotiating the peace agreement. The strategy ended in spectacular failure as the mobilization of Ukrainian troops in Eastern Ukraine earlier this year resulted in a military stand-off with Russia, in which both the West made it clear they did not intend to follow Ukraine into a war.

Following the failure of the strategy, the US and its European partners have growing concerns that the zero-sum approach to Ukraine threatens to permanently alienate Russia and possibly cement a de facto Russian-Chinese alliance. Furthermore, an increasingly authoritarian Ukraine appears to be moving toward socio-economic collapse and can drag the West into a major war with Russia.

The articles by Yatsenyuk and Lucas are a response to the West distancing itself from Ukraine. At the core of anti-Russian propaganda is to present all competing security interests as a conflict between democracy and authoritarianism.

Propaganda is the science of convincing an audience by bypassing reason. Morally dichotomous stereotypes of a morally superior power versus an inferior one are created to filter through the complexities of the world in a manner that can only result in one conclusion. Presenting all events through the prism of democracy versus authoritarianism is the modern equivalent of the colonial binary division of civilized peoples versus savages.

The language is subsequently distorted by the stereotypes that emerge from this. George Orwell’s concept of ‘newspeak’ entailed using simple language and dichotomous words that arouse and contrast favorable attitudes versus negative attitudes. Distorting the language meant that “War Is Peace, Freedom Is Slavery, and Ignorance Is Strength.” A new and simple language has similarly been constructed in the real world in which the discussion of objective realities are replaced with distorted words: subversion is democracy promotion, coup is democratic revolution, war is humanitarian intervention, and violation of international law is a rules-based international system. In contrast, any action by Russia is uncritically accompanied by words such as regime, authoritarian, aggressor, imperialist, sphere of influence and other terms that develop a Pavlovian reflex of contempt.

The strategy of Yatsenyuk and Lucas is very appealing as Washington eagerly attempts to command the loyalty of its allies vis-à-vis Russia and China by framing all international politics as a struggle of democracy versus authoritarianism. The public has also been wired for such an interpretation. When was the last time any of us opened up a newspaper and read about competing security interests between NATO and Russia? The stereotype of Western civilization against Russian barbarians has 500 years of continuity, in which objective facts become a mere background noise of a Manichean struggle between good and evil.

If propaganda is defined as persuasion by bypassing reason, the opposite is a return to objective and measurable facts. After all, Russia’s positive relations with East Asian democracies such as Japan and South Korea on its Eastern borders is a clear indication that Moscow is not concerned about NATO’s ‘democratic values’, rather Moscow reacts to NATO as a military bloc that subverts, expands and intervenes.

How do we measure Ukraine’s “unimaginable progress” since 1991 that has become a nightmare for Russia? As argued by Ukraine’s main opposition leader, Victor Medvedchuk, it is the only former Soviet republic that has not recovered its economic strength since the USSR broke up in 1991. The Ukrainian economy has shown potential when it was positioned as a bridge between the West and Russia, and collapsed when Ukraine began positioning itself as an anti-Russian bulwark.

Ukraine may well now lose its status as a gas transit state, and the rest of the economy could subsequently collapse without foreign assistance. The Estonian President Kersti Kaljulaid, one of the most eager supporters of the Maidan uprising in Kiev, recently warned her citizens against investing in Ukraine. The country is now the second-poorest state in Europe in terms of official GDP per capita, the oligarchs have overwhelming control, and the population has plummeted from 52 million in 1991 to somewhere between 30-35 million, according to numerous credible estimates. The exact figure is unclear because, incredibly, Kiev hasn’t conducted a census for over two decades.

The efforts to sell an anti-Russian government in Ukraine as ‘democratic’ similarly conflicts with objective realities, such as how NATO membership was offered to Ukraine in 2008 when only a small fraction of the population desired membership. Likewise, Washington backed the toppling of the democratically elected president in a coup that did not have democratic majority support by the population.

President Zelensky won his country’s top job on a political platform of restoring peaceful relations with Russia, and his popularity has fallen steadily after that objective was abandoned. In February, Kiev closed down several independent media outlets accused of being too Russia-friendly. Then, in May, Kiev placed the main opposition leader, Medvedchuk, under house arrest. In April 2021, Ukraine arrested 60 demonstrators that were not accused of engaging in violence, but instead expressing sympathetic views toward Russia.

Meanwhile, Strana, the country’s third most popular news website has been banned, simply for adopting a critical posture toward Zelensky’s government.

Also ignored is how Kiev’s partnership with neo-Nazi groups like Right Sektor and militias such the Azov Batallion, who openly wear swastikas, has caused great concern elsewhere, including with revelations reported by Israeli media.

Appeasing these groups has placed significant pressure on Zelensky to escalate conflicts in the Donbass and with Russia, as the failure to do so may result in them marching again against the authorities in Kiev. However, in the language of identity politics, Lucas reassures us that these objective realities of racism and nationalism are no big deal, as evidenced by Zelensky’s Jewish ethnicity and Ukraine’s first black MP winning an Olympic gold medal.

By conflating anti-Russian policies with prosperity and democracy, the supposed supporters of Ukraine are pushing their geopolitical pawn into the abyss and chalking it up as “unimaginable progress.”

In this, they are repeating the mistakes they made in Georgia, a decade ago, where the regime of Mikhail Saakashvili was provided with cover, even as it drifted toward increased authoritarianism, and corruption. Eventually, the house of cards collapsed.