Is your husband, dad or son a Proud Boy? The Fred Perry-clad group’s European leader tells RT their members are just ordinary men 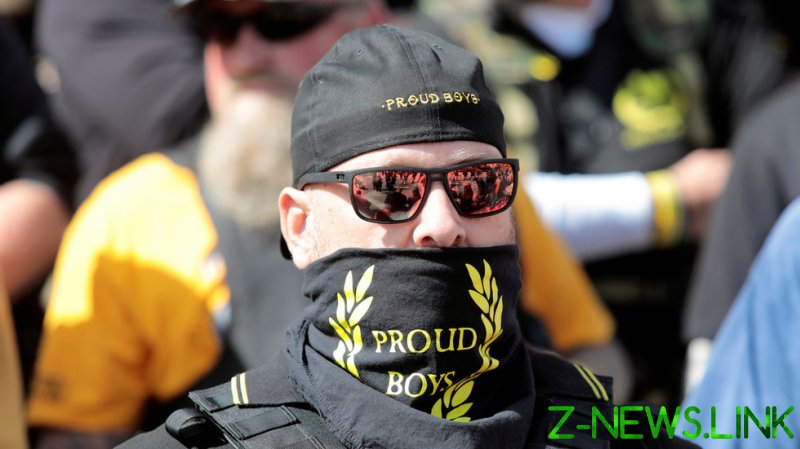 The Proud Boys have dominated the news since Donald Trump ordered them to “stand down, and stand by.” The president was asked about them during this week’s live debate with Joe Biden. But the group’s most senior figure in Europe can’t see what all the fuss is about – he thinks they’re actually “pretty boring.”

Using the pseudonym J.T Rockefeller, he’s a small business owner in his mid-30s, and spoke exclusively to RT.

J.T said: “Our stance has always been, don’t talk to the media – that’s in our code of conduct and only I can authorise it. But we as the leadership felt it was a good opportunity to put our point across now. We’ve had lots of requests from the media but if we’re completely honest, one of my fears is we would be quite boring to journalists.

“They’re looking for something spicy, for us to say we hate this group of people and sell it as something it isn’t. Actually we’re quite boring, not to our members, but for everyone else.”

The reason why Trump was asked about the Proud Boys was due to their racist image of whipping up division and hatred. Their Wikipedia page paints that picture and newspapers label them a “hate group.”

He said: “We are the same organisation across Europe as we are in America. We’re a men’s drinking club and a support group for men. If people want grassroots activism there is UKIP, if people want to fight on the streets they can join the EDL (English Defence League) idiots – we’re not here to fill those voids. We do attract a certain type but we have a very robust vetting process. It keeps out undesirables, if people want to look for fights against Antifa, this isn’t the group for them.”

The Proud Boys chairman in America, Enrique Tarrio, isn’t white, and pictures show many non-white members. That aside, Gavin McInnes, who formed the group in 2016, has made racist remarks in the past. Also, the Proud Boys Britannia Telegram Channel which the group moderates does contain content which some would deem racist and provocative.

J.T explained: “Enrique and I speak on a daily basis, he is an Afro-Cuban immigrant to America. We have numerous members of colour over there and also in the UK. We’re not interested in identity politics, it’s not about the colour of people’s skin, it’s about their strength of character. We would be the worst white supremacists in history. White supremacists don’t even like us, they think we’re race traitors.”

If the wrong narrative is being played out and they are being judged on biased information, what do they stand for?

J.T explained: “We are Pro-Western, the West has some of the most forward thinking, democratic, places in the entire world – it’s a fantastic place to live and we have freedoms other countries don’t. It’s a real, great mix of cultures.

“Some ideologies don’t mix on the surface. The perfect example is Indians coming to the UK many years ago, now the UK’s favourite dish is chicken tikka masala. But the dish we eat – it’s been adapted to suit Western palates; they wouldn’t serve it up in India.

“What we’ve seen with the media pushing things and the rise of terrorism, perhaps people have gone too far right. The media stokes diversity, but we don’t care about that stuff, we care about freedom of speech, democracy and not being told how to live our lives.”

While in North America it’s common to see the Proud Boys leading marches, in Europe their profile is more discreet. Their UK meetings are held in secret, as are members’ identities. Some venues refuse to host them, but J.T explained that they are welcome in plenty of locations.

Members (who are aged between 19 and 55 in the UK) have tattoos, which they are only permitted to get following club votes. J.T has it on his forearm and said: “I personally don’t divulge my membership to everyone but I am a fourth-degree member with the tattoo. My family knows about it, my friends are predominantly people in the club. I have a couple who aren’t but it doesn’t impact them, one is a big left-wing Labour supporter but we have grown-up discussions.

“It’s the court of public opinion, as soon as you Google us, it’s white violence and nationalists – they have found their bogeyman. I don’t want to risk my career and the livelihood of my children just because of something some fool put on the internet without speaking to us.

“When we meet, we get drunk and have a party. It’s fun and mates catching up. Part of the code of conduct states that if a member is acting badly, we send them back to the hotel. We have to be composed gentlemen.

“A lot of the venues enjoy us being there, you think of a private venue with all of us, we each tip £10 to the bar staff which is one of our rules. We don’t disrespect people, we are polite to any employees of establishments, we don’t harass members of the public and we don’t disrespect other members. I know it sounds counterproductive to what we are portrayed to be but it’s about being nice to the public and each other.”

If their profile is smaller than across the Atlantic, one area all chapters converge is the uniform. Proud Boys wear Fred Perry’s black and yellow polo shirt. The British brand has become so dismayed at the link, they have stopped selling it in North America.

J.T said: “The issue is Fred Perry has a bottom line with sales and we get a bad rep. Our Wikipedia page is completely wrong and you look at a lot of news articles and they quote that page. We’re not going to stop a tradition just because the company doesn’t like it.

“Fred Perry is not as popular in America, but here I could walk down the street and see three people wearing the black and yellow polo shirt – and have no affiliation with us at all. We will still wear them and for our brothers in America who can’t get them anymore, we’re more than happy to help facilitate that for them.”

The Proud Boys in the UK have posted pictures of Fred Perry online orders and boxes of the shirts ready to be couriered to the US and Canada. While they appeal to those on the right, J.T explained there is no requirement to support any political causes. He feels that Boris Johnson is handling Covid as well as any prime minister would.

The club for him is about fostering a feeling of community – he said: “Male suicide is something that plagued this county in the past, you have the Women’s Institute (WI) which is a club for women, but there’s nothing like that for men. We’ve created this gap in the market for men to have a place where they belong and talk how they want.

“It’s a safe space where men can be men – we meet once a month and have big events, we keep it secret and we don’t bother anyone. Then we go back to being good husbands and members of society.”

It takes 12 months to become a Proud Boy, due to the vetting process.

As a result of the massive exposure, a mountain of requests to join has flooded in recently. The group estimates they admit five people per hundreds of applications. Everyone undergoes a ‘prospect stage’, where they are on probation and can be asked to leave if the club doubts their suitability. Only by completing that are they deemed full members, also after a club vote.

But what does J.T feel is the key to understanding the group? “If you feel like you’re missing something in your life and camaraderie, give us a call,” he explains. “If you’re a racist or an extremist, go somewhere else. We won’t back down from fights but we’re not looking for it and want to avoid it. And what we talk about and get up to is nobody’s business, just like what they do is not ours.”