Home / WORLD / Is this the Handmaid’s Tale? First-year congresswoman details her woes as ‘BIRTHING PERSON’ to much bemusement 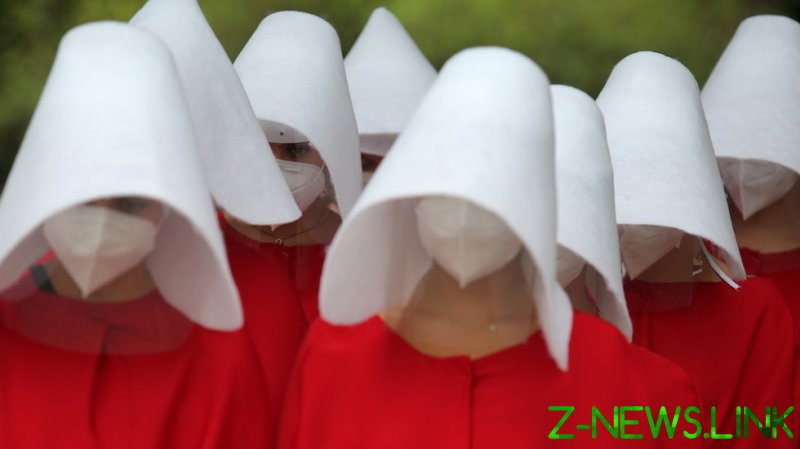 The Missouri Rep. addressed the House Oversight and Government Reform Committees on Thursday, sharing her experiences “as a single mom, nurse, activist, and Congresswoman…[committed] to protecting Black mothers, Black birthing people, Black babies, and to save Black lives.”

While her pitch sounded innocuous enough at first – protecting women and children in a country that despite its first world status nevertheless is afflicted with one of the highest maternal death rates in the West, would seem to be a rather uncontroversial issue – a closer look at the tweet raised some alarms. Not only were her choices of who to protect limited to black children and parents, but there was that phrase in the middle of her conclusion: “Black birthing people.”

Some did a double-take at Bush’s list, wondering what exactly was meant by that term. Surely the US hadn’t crossed through some kind of reality barrier, landing the nation of Gilead in Margaret Atwood’s religious-dystopian novel The Handmaid’s Tale, in which the few remaining fertile women are forced to carry the babies of other women to term and otherwise live according to obscure biblical passages?

Then again, US birthrates are down the most in 32 years, according to the National Center for Health Research.

Nevertheless, some found the overwrought display of belated emotions on Bush’s video to be patronizing, or even insulting.

Others took it as a glimpse of the future, where wombs need not be tethered to human bodies and subjected to the indignities of being told what to do by racist, and simply ignorant, doctors and nurses.

Bush later shot back at her critics, tweeting on Thursday night that the reaction to her initial comments showed that “Republicans” care more about her use of “gender-inclusive language” than they do about her “babies nearly dying,” as she described in her testimony.

Journalists and copywriters have increasingly been pressured to tease their words into torturous pretzels in order to avoid offending certain members of the LGBT community – essentially a small but extremely vocal set of transgendered people who threaten aggression when they are mistaken for men. Those who avoid bowing and scraping to the pronoun police are savaged as “TERFs” – trans-exclusionary radical feminists – and exiled to the far corners of the internet.

The furor generated over these TERF wars has given rise to terms like “people who bleed” – born of what was no doubt a well-meaning Tampax ad trumpeting that “not all women have periods” – but the company made headlines for all the wrong reasons by tentatively dipping their toes into woke waters. The tagline would go down in infamy as the basis of the retweet that got beloved Harry Potter writer J.K. Rowling canceled – even though Rowling has previously bent over backwards to include the LGBT community, even changing some of her characters’ backstories to make them gay or lesbian.