Home / WORLD / Is the United States done being the world’s cop? If only…

Is the United States done being the world’s cop? If only… 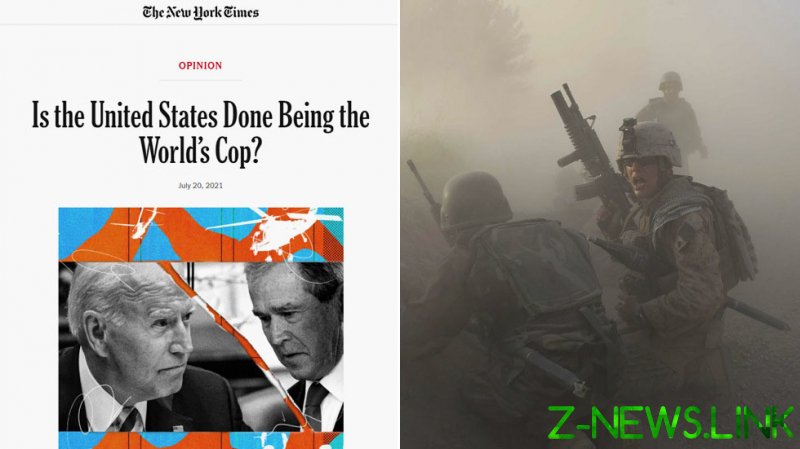 A well-thought-out article in the New York Times asks an interesting question: “Is the United States done being the world’s cop?” Most people will understand what that description means: the discursive image that America is the global policeman, framing itself as a country that apparently constantly engages in overseas military action in the name of ‘democracy’ and ‘a rules-based international order’. A country that is zealous, but apparently driven by good intentions and for the wellbeing of all, right? At least, that’s how its advocates paint it.

The article touches on the rapid pace of the US withdrawal from Afghanistan and the equally rapid gains of the Taliban to make the argument that, similar to Trump’s ‘America first’ doctrine, President Biden has had enough of the ‘forever wars’ approach that defined the opening decades of this century and is now taking a narrower approach that no longer involves costly military adventures against foreign countries.

It depicts a historically woven journey from US isolationism at the beginning of the 20th century to the present day. It offers a contrary view, too, citing Noam Chomsky’s observation that “little is changing” in practice in American foreign policy and it’s still led by self-interest.

Chomsky’s observations are the most accurate way to describe what is happening. America is not quitting as the world policeman because, arguably, it has never really assumed that role. The argument being made in the NYT’s article is, in effect, that the US is withdrawing from the world, after its flawed global war on terrorism and the invasion of Iraq did “severe damage to the humanitarian justification for military intervention”.

If only that were true. Unfortunately, the evidence is all to the contrary. Washington’s overtures to democracy and human rights above all have always been a sugar coating for what is a highly aggressive and self-interest-driven foreign policy that simply differs according to geopolitical context and method. When viewed in this light, nothing has changed at all.

The US still believes in imposing its ideology over the whole world and reigning supreme, and it is misleading to claim its destruction of various countries was done in the name of the greater good or in pursuit of some kind of altruistic cause. If one looks at the Biden administration, it may be sidestepping certain specific conflicts in relation to terrorism and the Islamic world, but the same zealous and self-interested foreign policy, presented as a global struggle for democracy, is still very much in evidence. All that has shifted is the enemy and the point of emphasis. Only yesterday, after all, Biden launched an airstrike against Somalia.

What the article gets right is that, in the wake of World War I, American foreign policy experienced a shift. The US entry into that war and Woodrow Wilson’s 14 points redefined its doctrine from having a merely regional isolationist scope (where it had planted itself as the hegemon of the Americas), into a globe-spanning one that permanently fused the idea that, in its ‘national interest’, the US had to remake the world in its own image. Thus ‘national security’, ‘ideology’ and ‘interest’ all became one encapsulating vision in what was the commencement of the universalisation of American foreign policy.

It is this approach that, ever since, has seen the US locked into a zero-sum game of hegemony because of its inability to compromise on dogmatism. The mindset is that the US is not ‘safe or secure’ unless the world is completely in harmony with it. There is always something that is ‘threatening’ it – and this set the stage for the Cold War, the War on Terror and, now, of course, the China challenge.

What the NYT article also gets wrong is that the concept of ‘forever wars’ has dominated the entire period since World War II. It was only more prominent during the War on Terror period of 2001 to 2018 because the international system was unipolar and therefore there was less opposition to the United States.

America’s spree of conflicts across the Middle East is ending not so much because of domestic opposition to them – the US is always capable of drumming up public consensus for war, after all – but because its foreign-policy priorities have shifted back towards ‘geopolitical competition’, with this again being defined as a win-lose fight between democracy and authoritarianism.

Biden’s rhetoric has been soaked in talk of “winning” the 21st century and “defeating” China, and the abiding principle remains the same: national-interest politics is inseparable from the aim of spreading and dominating values, even if, in practice, that is not true.

That the US may wage fewer wars in this period is not because it is “less altruistic” than before – this is the major mistake in the NYT piece – but because it lacks the political space in the international system to do so. The Syrian war was a turning point in this, as for the first time in decades, the US faced serious resistance to its regime-change efforts from competing powers. In essence, Russia thwarted America’s plans, providing an opposition that was missing in Iraq and Libya.

The US doctrine of ‘spreading democracy in the Middle East’ has now shifted to ‘spreading democracy to counter China’. The Biden administration would likely more than happily wage a proxy war against Beijing if the circumstances were right, so as to win control of a particular country or territory, in the way of the cold wars of the past.

Any claim that there’s been a shift in US foreign-policy doctrine towards renouncing the idea of fighting ‘foreign wars’ is misplaced and misleading. There has been no such tilt, not even by an inch: Washington has merely refined where its priorities are, and they lie 6,922 miles away.