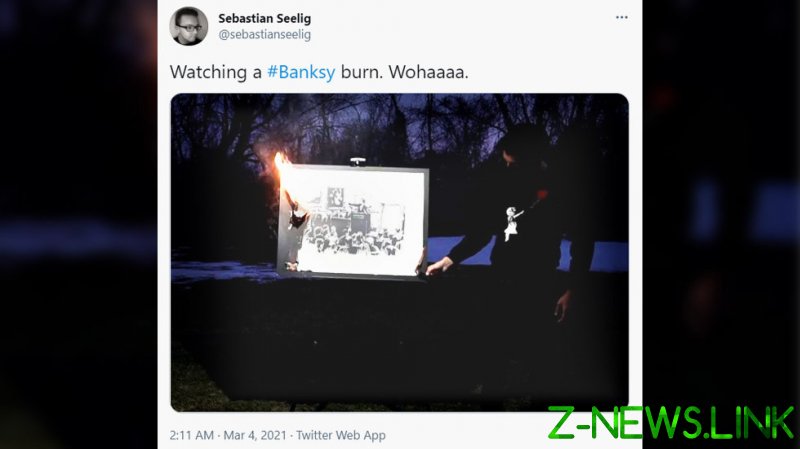 Blockchain company Injective Protocol paid $95,000 for the art titled ‘Morons (White)’ – which features an auction for a painting that reads, “I can’t believe you morons actually buy this sh*t” – before setting it on fire and recording the destruction live. The art is now solely available as an NFT (non-fungible token) and can only be purchased and viewed digitally.

Spectators had mixed feelings about the destruction, with some calling it a “milestone in modern art history,” and “one of the most punk things I’ve seen recently.”

Others expressed disgust at the incineration of a perfectly good Banksy piece, while some even doubted whether the act was “real or just some edgy PR stunt.”

“How are you proving you’re burning the real one?” asked one Twitter user. “The original could still be on the founders wall for all we know.”

CBS News, however, apparently saw the piece’s certificate of authenticity and receipt, confirming that the stunt was legitimate.

“We view this burning event as an expression of art itself,”said Injective Protocol figure Mirza Uddin. “We specifically chose a Banksy piece since he has previously shredded one of his own artworks at an auction.”

NFT art has become increasingly popular over the past few years, with illustrations, albums, and videos being sold for sometimes millions.

Canadian musician Grimes recently sold almost $6 million worth of art as NFTs, while American rock band Kings of Leon will release their upcoming album ‘When You See Yourself’ in the format.