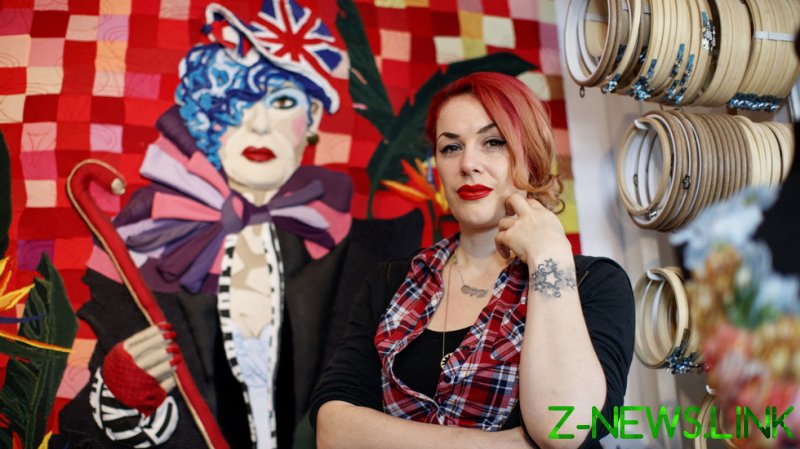 It gives me a warm, fuzzy feeling to see the snooty Royal Academy squirming after backtracking on its decision to take artist Jess de Wahls’ embroidered, iron-on patches off sale in its gift shop after eight people complained about a historic transphobic blog post.

The RA had caved in to demands from a woke mob of social media ‘campaigners’ who objected to the East Berlin-born 38-year-old’s 2019 comment that, “I can not accept people’s unsubstantiated assertions that they are in fact the opposite sex to when they were born and deserve to be extended the same rights as if they were born as such.”

The ghastly swivel-eyed trolls and trans activists went into overdrive. While wishing death on the artist was not enough, they decided de Wahls was guilty of heresy against their nonsensical gender ideology and therefore must be denounced, cancelled and punished with immediate effect. The RA, the mob demanded, must ban the sale of her work at a gift shop packed with overpriced tat that no-one really needs. That’ll show her!

Then the backlash. And this is the fun bit, because just a few weeks ago, the RA might have got away with its attack on freedom of expression. But the judge sitting at an appeal tribunal launched by tax expert Maya Forstater – after she was sacked for saying pretty much exactly the same thing as de Wahls – declared that ‘gender critical’ beliefs did not, under law, “seek to destroy the rights of trans persons”.

With that being the case, the RA looked out of step with a shift in the public mood. Now, no matter how much the wokelords insist their bonkers gender ideology is the only acceptable view, it is definitely becoming more acceptable to hold the opposite position.

No one would go so far as to say the gender debate is over. But Stonewall, the self-appointed cheerleader of the eminently arguable view that ‘trans women are women’, is on the ropes, with members of its ‘Diversity Champions’ scheme backing off in droves recently. And now the RA has thrown in the towel, admitting that people who make patches are free to say whatever they believe. It’s not much of a start, but it is a start.

The academy piously pointed out that it had apologised to de Wahls for the way she was treated. However, it seemed that was because she was upset at learning via social media that she had been cancelled, and not from the RA directly. The statement is a long way from admitting, “Soz! We wuz wrong!”

The tin-eared RA ‘apology’ is more about celebrating its own self-declared values – “This has confirmed to us our commitment to freedom of expression” – despite the evidence that it will ditch them at the first sign of trouble. This is because, as the over-legalled mealy-mouthed excuse warns, “Freedom of expression can open up debate, create empathy or respect for difference, it can also at times cause hurt and outrage.” Blah, blah blah.

For an institution that considers itself a beacon of enlightenment on the international arts scene, backed by 80 of the world’s leading artists, this whole episode is an embarrassing disgrace.

The RA might blame “internal processes” and “failure of communications”, or suggest it had “no right to judge” and that it “betrayed our most important core value”, but I don’t buy any of this for a minute. This is classic ‘sack the comms team’ for overreaching, while ignoring an unaccountable and ingrained administrative culture that imagines itself on a higher plain of moral awareness than the artists on display, or the hordes of visitors who come to see their works in Burlington House on London’s Piccadilly.

One reassuring outcome of this latest round in this ongoing battle over gender ideology is that the artist herself has apparently emerged unscathed and more robust than ever from her unpleasant brush with cancel culture.

“I’m not cancellable… because I don’t give a f**k,” de Wahls told online magazine Spiked. “What the f**k are they going to do? They keep putting rocks in my way and I’m making a f**king statue out of them. I don’t care. I’m not going to have arseholes make my life miserable just because they are miserable.”

Maybe she could embroider that sentiment on a patch. I’d buy one if they sold them at the RA gift shop.