Is it ‘tornadx’ now? In his latest gaffe, Biden says ‘they don’t call ‘em tornados anymore’ during climate-change speech 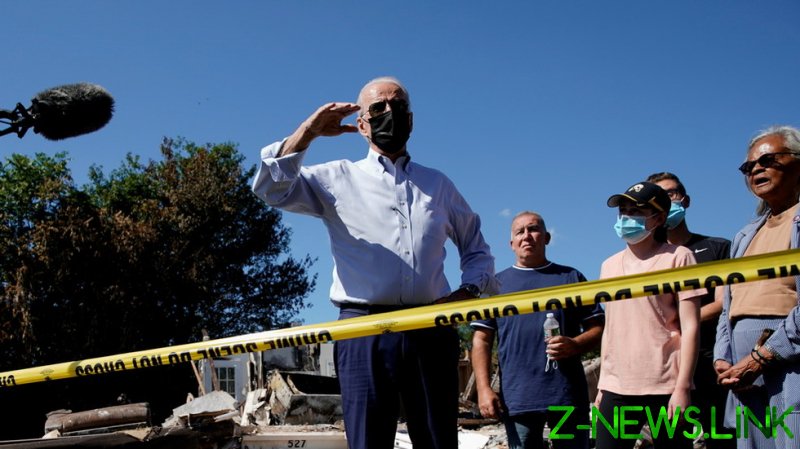 Biden visited New Jersey on Tuesday to survey the damage wrought by Hurricane Ida, which tracked up to the US northeast after battering Louisiana a week ago. The storm brought devastating floods and killed dozens of people, while exposing the inability of US infrastructure to handle extreme weather, and, to Biden, the country’s vulnerability to climate change.

Biden told reporters that the damage done by Ida would become more commonplace unless action is taken to combat climate change. “Every part of the country is getting hit by extreme weather, and we’re now living in real time what the country’s gonna look like,” he implored.

However, Biden then became confused when listing examples of this extreme weather.

“It’s all across the country, you know…it looks like a tornado, they don’t call ’em that anymore, that hit the crops and wetlands in the middle of the country in Iowa and Nevada and I mean, it’s just across the board,” he mumbled. “And you know, as I said, we’re in this together.”

Nevada residents also reminded Biden that not only is the state unaffected by tornadoes, it also lacks crops and wetlands, and is not situated in the middle of the country.

Others joked that the ‘woke’ Biden administration had decided to rename tornadoes, due to some previously-unknown offensive property of the word.

A charitable interpretation of Biden’s stumbling statement was given by Townhall editor Spencer Brown, who suggested that the president was referring to a Derecho (a kind of wind storm that can sometimes do tornado-like damage) that hit the city of Nevada, Iowa, last year.

Nevertheless, Biden’s slip-up was filed away as yet another one of his regular gaffes and slip-ups, and was seen by critics as another example of the president’s apparently deteriorating cognitive capacity.