Home / WORLD / Is all the fuss over Tucker Carlson warning Dems are carrying out ‘great replacement theory’ because he’s on to something? 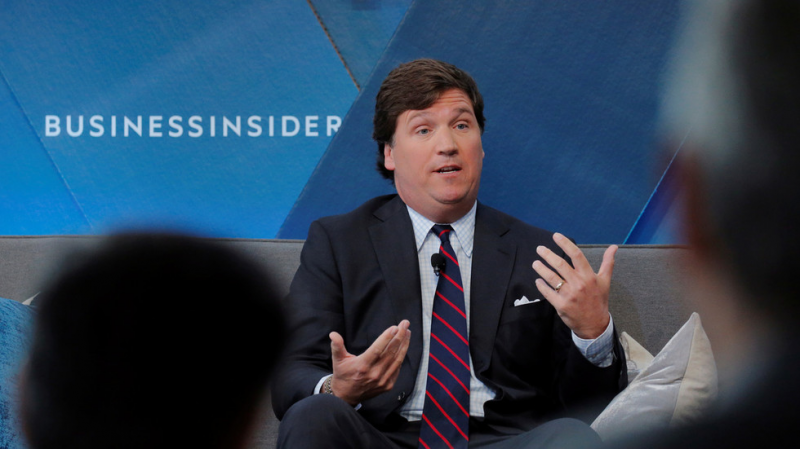 Tucker Carlson is once again causing a stir in the United States and there have been renewed calls to have him taken off the air.

What is causing so much offence is the Fox News presenter’s opinion that the Democrats have been using the very real immigration crisis in the United States to bolster their electoral prospects.

Carlson argues that the Dems are allowing a large increase in migrant numbers in order “to reduce the political power of people whose ancestors lived here, and dramatically increase the proportion of Americans newly arrived from the third world.” He also said that “in political terms, this policy is sometimes called the great replacement – the replacement of legacy Americans, with more obedient people from faraway countries.”

Carlson’s arguments are not new, and there have been previous allegations that he has aired what his detractors claim are white nationalist conspiracy theories. The latest attack on him has come, once again, from the Anti-Defamation League (ADL) – an organisation that was founded in 1913 to counter antisemitism.

The ADL’s CEO, Jonathan Greenblatt, has called on Fox News to have Carlson taken off the air. He said: “For Tucker Carlson to spread the toxic, antisemitic and xenophobic ‘great replacement theory’ is a repugnant and dangerous abuse of his platform. If it somehow wasn’t clear enough before to the executives at Fox News that Carlson was openly embracing white nationalist talking points, let last night’s episode be case and point.”

Now let me say that the ADL has been a noble organisation and combated the cancer of antisemitism. But on this one they have chosen both the wrong argument and the wrong target. Carlson’s points have nothing to do with antisemitism and nor is he in any way an anti-Semite. And nor is he backing down.

Asked about the ADL attack last night, he forcefully said “F**k them,” adding: “So the great replacement theory is, in fact, not a theory. It’s something that the Democrats brag about constantly, up to and including the president.

“And in one sentence, it’s this: ‘Rather than convince the current population that our policies are working and they should vote for us as a result, we can’t be bothered to do that. We’re instead going to change the composition of the population and bring in people who will vote for us.’ So there isn’t actually inherently a racial component to it, and it’s nothing to do with antisemitism.”

Carlson is, of course, right on this last point, as his arguments are about numbers, not antisemitism. He also claims that the ADL is now being used as an arm of the Democrat party – interestingly, Greenblatt was a former special assistant to Barack Obama when he occupied the Oval Office.

For me, the real issue here is not whether Carlson is right or wrong, but whether he has the right to make his points. Indeed, I don’t think that a popular TV host should be cancelled because he airs opinions on his own show that offend people of a certain political persuasion.

I would also argue that if you don’t like what Carlson is saying, then you don’t have to tune in. It’s not like the US in 2021 is akin to the UK in the early 1950’s, where there was only one TV channel. There is a plethora of other shows on at the same time as Carlson, and if you’re offended by his views, then go and watch CNN.

Moreover, the US is not North Korea, where only the ‘party line’ can be aired on television. If Carlson believes that the Democrats are purposely attempting to alter the demographics of US society for electoral purposes, then he has every right to say so.

I also have a sneaky feeling that there is so much uproar because Carlson could be on to something. Indeed, I get the impression that they ‘doth protest too much.’ There has been a huge surge in immigration into the US via the southern border since Biden became president, and his administration seems to be doing nothing about it.

Remember that this is a guy who, as Carlson delights in pointing out, said this in 2015 while vice president: “An unrelenting stream of immigration, non-stop, non-stop. Folks like me who were Caucasian, of European descent for the first time in 2017 will be in an absolute minority in the United States of America, absolute minority. Fewer than 50% of the people in America from then and on will be White European stock. That’s not a bad thing. That’s a source of our strength.”

Finally, what concerns me most about this affair is that what the ADL are doing forms part of a worrying trend that we are now seeing in the West. When you disagree with someone, you don’t argue your corner, you just have them cancelled.

We have seen something similar happen in the UK where left-wing activists have attempted to have GB News cancelled before it even went on air.  They failed, and the ADL will fail too.

I predict that Fox News will back Carlson to the hilt. He is their most popular host, and his show regularly draws 3 million viewers. He also offers a refreshing alternative to the liberal narrative, and maybe that’s the real reason why so many on the Left are coming up with their own ‘great replacement’ plan, to have someone else take over his slot.