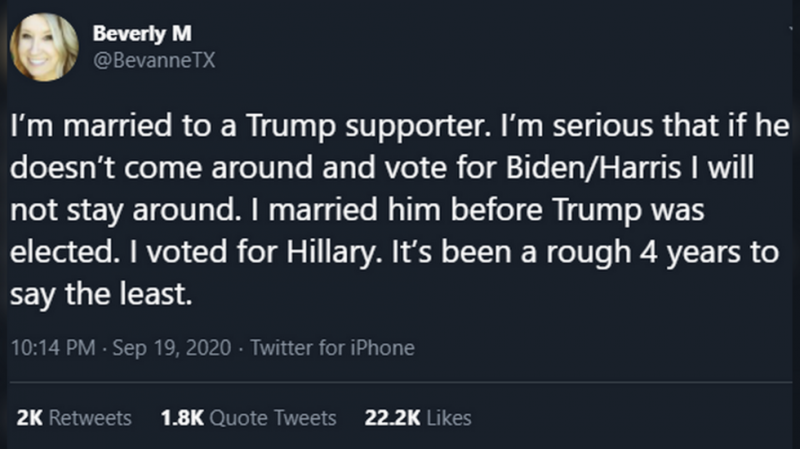 “I’m married to a Trump supporter,” the woman, identified as Beverly M, said on Saturday on Twitter. “I’m serious that if he doesn’t come around and vote for Biden-Harris, I will not stay around.”

The woman identifies herself as a Black Lives Matter supporter on Twitter and said she moved to Texas from the Midwest in the 1980s. She said she married her husband before Trump was elected, and she voted for Hillary Clinton in 2016. “It’s been a rough four years, to say the least,” she added.

Beverly M said that with so much at stake in the 2020 election, she considers Trump supporters to be selfish. “That’s why I am angry at my husband,” she said. “When I’m begging him to do this for our children… and for our future grandchildren and that doesn’t matter to him, that’s eye-opening.”

Her tweets met with largely humorous reaction, such as a commentator who tweeted: “If she’s husband shopping, I’d recommend Portland,” and another who said: “Karen, it’s going to be a rough four more.” Australian journalist Rita Panahi posted a GIF of an angry woman trashing a house and said in the caption: “That’s just incentivizing a vote for Trump.”

But Beverly M’s plight hit home with many Twitter users, who spoke of their own marital and family conflicts over politics in recent years. Some said they’ve avoided family gatherings since 2016, and another said he could no longer respect his mother and stepfather because they lack “the capacity to think freely.” One woman said she broke up with her Trump-supporting boyfriend last summer: “To me, not supporting Trump is a moral decision, and to him, it’s only political. I couldn’t keep pretending that I had [not] lost respect for him.”

Marital tensions over politics have escalated since Trump was elected in 2016 and are likely intensifying again as his November re-election bid approaches. A 2017 study by US polling firm Wakefield Research found that one in 10 couples had ended their relationships over political differences. Millennials were more than twice as likely to have broken off a marriage or serious relationship, at a rate of 22 percent.

One in five couples argued even more about Trump than about money, Wakefield said. While most couples have looked for ways to work through political differences – radio host Michelangelo Signorile said his show had become like a support group for “Democrat women married to MAGA men” – many have given up. A Harper’s Bazaar magazine article in 2017 went so far as to tell readers: “If your partner is a Trump supporter and you are not, just divorce them.”

The reasoning in the article was revealing: “Supporting Trump at this point does not indicate a difference of opinions. It indicates a difference of values.” And it concluded: “‘My partner’s views are morally repulsive to me’ is one of the best reasons I can think of” to divorce.

The mainstream media and Democratic Party have framed opposition to Trump as a moral issue. His policies and conduct aren’t merely wrong or unwise – they are immoral and “violate norms.” Media figures such as CNN hosts Jake Tapper and Don Lemon use words such as “heinous” and “racist” to describe Trump’s actions. Biden and his vice-presidential running mate, Kamala Harris, have billed their campaign as a battle for “the soul of America.”

That might seem an ironic theme from a party often portrayed as hostile to religion. More than twice as many Republicans as Democrats believe the Bible should have at least some influence on US laws, according to Pew Research Center data. But when it comes to Trump, Democrats like Beverly M have clearly gotten the moral message.