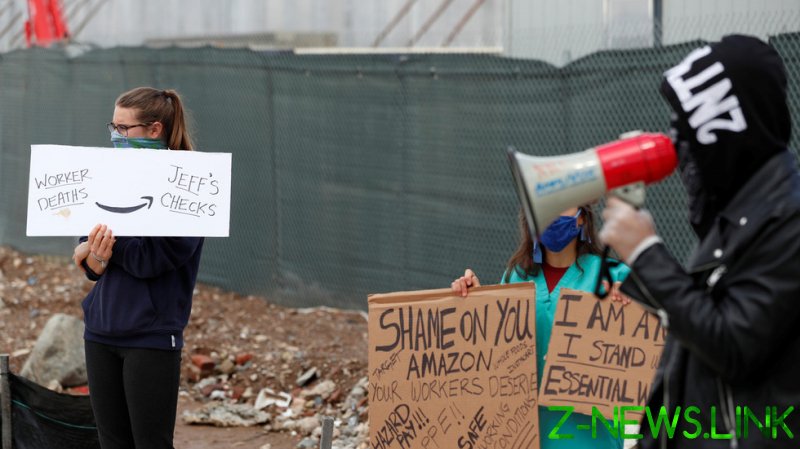 In this case, the online retailing behemoth is arguing that in-person voting is needed for a “valid and fair” election when employees at one of its warehouses in Alabama vote whether to unionize. Amazon has asked the National Labor Relations Board to delay the union vote for 6,000 warehouse workers so it can be held in person.

Mail-in voting was meant to provide a safer option amid surging Covid-19 cases, just as the US presidential election supposedly needed to allow for mass mail-in ballots to be cast amid the pandemic. Former President Trump argued in the months leading up to the November 3 election that heavy reliance on such ballots would make the contest more susceptible to fraud. He later blamed his loss to Democrat Joe Biden partly on such ballots.

The Washington Post called Trump’s warnings “a fusillade of falsehoods” and said his statements on the issue were “muddled and dishonest.” In the election’s aftermath, the newspaper repeatedly called Trump’s fraud claims “baseless” and “debunked” and lamented last week that millions of Americans continue to believe “the lie that lingers.” The Post joined other mainstream media in calling the 2020 election “the most secure in US history.”

The hypocrisy of Amazon’s argument on mail-in voting when the election concerns unionization of its work force wasn’t lost on social media users. “That’s the most hilarious thing I’ve seen all day,” one commenter said on Twitter. “Who knew vote by mail could be an issue? Oh, the irony.” Another said, “Mail-in voting: good enough for the American people but not for Amazon.”

Another observer saw no humor in Amazon’s actions. “This type of irony and hypocrisy isn’t funny,” he said. “It’s disgusting, and it’s tearing our nation apart.”

Adding to the irony was the fact that the Bezos empire’s divergent stances on mail-in voting apparently confused the censorship program at Twitter. When journalist Jack Posobiec tweeted about Amazon’s argument that mail-in voting has “serious and systemic flaws,” Twitter mistook it as being about the presidential ballots, restricted the message and attached a warning, saying “this claim of election fraud is disputed.”

Amazon’s union vote was scheduled to begin on February 8 by mail. “We believe that the best approach to a valid, fair and successful election is one that is conducted manually, in-person, making it easy for associates to verify and cast their vote in close proximity to their workplace,” a company spokeswoman told USA Today.

Amazon’s founder, Bezos, is the world’s second-richest man and bought the Post in 2013. Bezos has feuded with Trump since at least 2015, and Amazon waited until Biden’s first day in office, January 20, to propose helping the federal government speed distribution of Covid-19 vaccines. The timing prompted conservatives to ask where Amazon was a month earlier, when thousands of Americans were dying from the virus daily amid a slower-than-planned rollout of the vaccines.