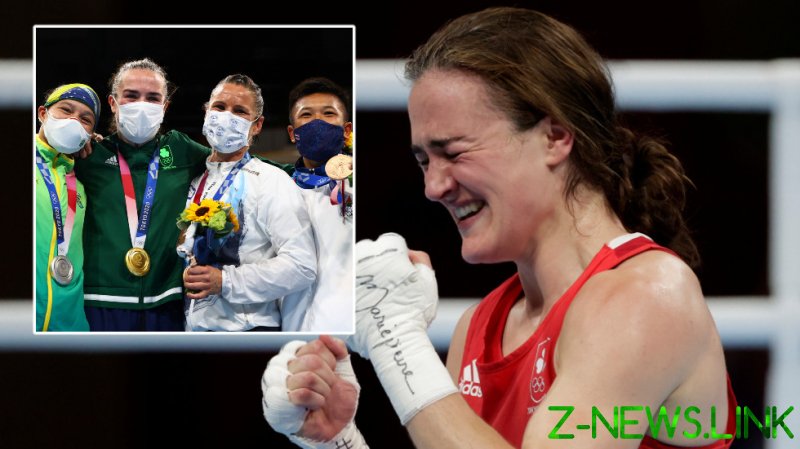 Dublin’s Harrington became just the third Irish boxer to win gold at the Olympics when she outpointed the reigning world champion, Brazil’s Beatriz Ferreira, in the early hours of Sunday morning in Tokyo.

In doing so, Harrington equals the achievement of both Katie Taylor and Michael Carruth, who have also won Olympic gold while representing Ireland – but if Harrington’s efforts in the ring were suitably rewarded with her medal, her sportsmanship outside of it has also been noted.

The clearly emotional Dubliner, who raised the hand of each woman she defeated en route to Sunday’s Olympic final, made sure that the other medalists in her weight class received the recognition they deserved when, as the trio of competitors began to leave, Harrington invited them up to the top step of the podium where all four – Harrington, Ferreira and bronze medal winners Mira Potkonen and Sudaporn Seesondee – embraced in celebration of their collective achievements.

Despite the fight taking place at 6am local time, the streets of Dublin – and, indeed, Ireland – were packed with locals celebrating Harrington’s win.

In fact, when Harrington was made aware of the raucous early-morning celebrations in the Irish capital, she remarked: “I didn’t even think anyone would be up watching!“

One of those watching the nail-biting fight with vested interest was Conor McGregor, who tuned into the fight while undergoing rehabilitation in the United States for the broken leg he suffered in his recent UFC date with Dustin Poirier.

“God bless you, Kellie Harrington,” wrote McGregor on Twitter. “What a journey! In the background then emerged forward, and then [you] went and [did] absolutely everything you said you where going to do.

“Olympic Gold medal champion! The condition you are in is incredible. Real work ethic. Congratulations, Kellie.“

McGregor’s enthusiasm was also matched by several others on social media, many of whom were quick to point out Harrington’s selfless act of sportsmanship at the medal ceremony.

“Well, isn’t that the true Olympic spirit right there – knock the absolute stuffing out of each other and then acknowledge and hug each other afterwards,” wrote one fan.

“Respect all the way though,” added another. “Skill recognizes skill. To lose the first round and come back is phenomenal. Definitely a worthy winner.”

“That is just pure class, dignified and respectful by all four boxers. Brilliant,” said a third.