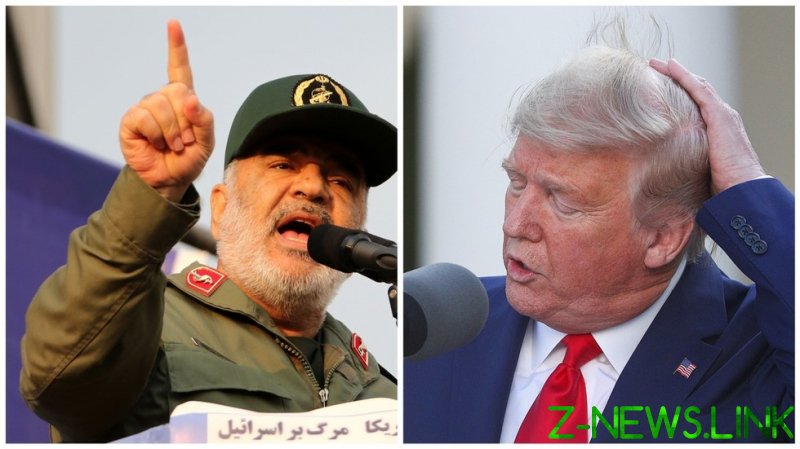 US President Donald Trump sent a series of headline-grabbing tweets this Tuesday, warning that any attack by Iran on the US “will be met with an attack on Iran that will be 1,000 times greater in magnitude.” The fiery remarks followed media reports claiming that Tehran is considering assassinating Lana Marks, the US ambassador to South Africa.

It didn’t take long for Iran to return the threat, with Chief of Iran’s Revolutionary Guards Corps (IRGC) General Hossein Salami taking a direct swipe at Trump this Saturday. He told local media that retaliation against a potential US action will be “serious” as “we will prove everything in practice.”

If a hair comes off an Iranian head, we’ll blow all your fluff.

Referencing a Politico piece – based on unnamed US intelligence sources – Salami plainly said there is no reason whatsoever for Iran to target Ambassador Marks.

The Islamic Republic may indeed be into carrying out clandestine operations abroad, but it only has in sight targets who were behind in the US drone strike that killed Qassem Soleimani, an influential IRGC General and long-time commander, near Baghdad airport in January, Salami acknowledged.

“We will hit the people who, directly and indirectly, played a role in the martyrdom of the great man,” he said.

The simmering US-Iran feud has escalated in recent weeks, mostly due to Washington threatening to “snap back” UN sanctions under the 2015 nuclear deal. The US walked out of the very same deal in 2018 but insisted on being within its rights to bring the punitive measures back.

Last month, Washington suffered a humiliating defeat at the UN Security Council after most of its members – including Britain, France and Germany, who continue to stick to the nuclear pact – rejected the US bid to trigger the sanctions return.

It didn’t stop the US from trying again, however. “We will return to the United Nations to reimpose sanctions so that the arms embargo will become permanent next week,” Secretary of State Mike Pompeo announced on Wednesday.

Responding to this, General Salami said chances of the UN supporting American bid are slim. “The United States is politically isolated today and did not even have its traditional allies with it on the issue of arms embargo,” he clarified.