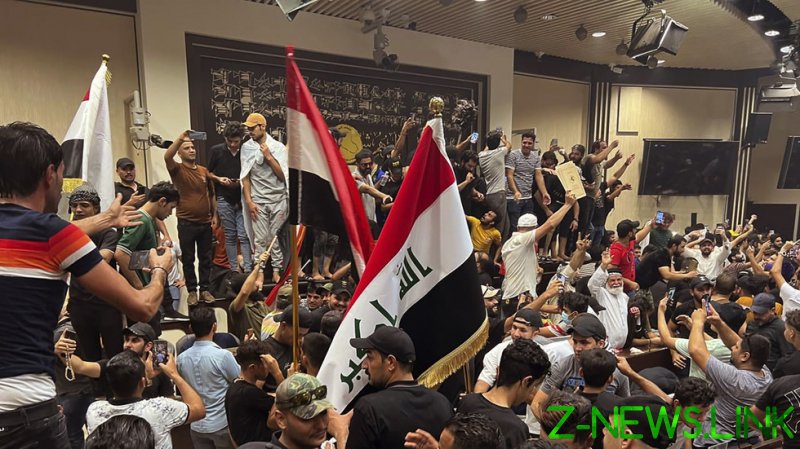 A large crowd of protesters forced its way into Iraq’s parliament building, demonstrating against government corruption and a prime minister candidate nominated some 10 months after the country’s last federal election.

The demonstrators were captured on film as they marched into parliament on Wednesday afternoon, many seen carrying Iraqi flags and portraits of popular Shia cleric Muqtada al-Sadr, who has stepped away from politics but remains influential. The group was largely made up of young men and numbered in the hundreds, according to Al Jazeera and other regional media.

Reporting from the Iraqi capital, Al Jazeera’s Mahmoud Abdelwahed noted that demonstrators had come from “many cities,” and traveled to Baghdad to protest “corrupt politicians.” Chants and slogans against a recently nominated prime minister candidate, Mohammed Shia al-Sudani, also dominated the event. A former governor and minister, al-Sudani was recently tapped to lead by a political alliance known as the Coordination Framework, made up of parties more closely aligned with Iran.

Al-Sadr’s faction, which took a large share of Iraq’s 329-seat parliament following the last federal election in October, has long opposed foreign influence in the country, including from both Iran and the United States.

No MPs were in the building when protesters stormed into Baghdad’s heavily fortified green zone, and while local media suggested demonstrators were met by riot police and water cannons earlier in the day, they reportedly faced little resistance as they pressed closer to parliament.

Prime Minister Mustafa al-Kadhimi – who has remained in power amid lagging attempts to form a new coalition since the last election – demanded that the protesters “immediately withdraw” from the area, warning that security forces would defend “state institutions and foreign missions” and “prevent any harm to security and order.”

Hours after the protest kicked off, al-Sadr himself took to Twitter to urge his supporters to “return safely to your homes,” saying their message had been received by the government. Not long after, protesters began leaving the building, some escorted by security forces, while others were seen chanting and singing in the streets as they made their way out of the Green Zone.