Home / WORLD / Iraq War supporter wants a tripling of US population to ‘beat the Chinese.’ But does the world really need 1 BILLION Americans?

Iraq War supporter wants a tripling of US population to ‘beat the Chinese.’ But does the world really need 1 BILLION Americans? 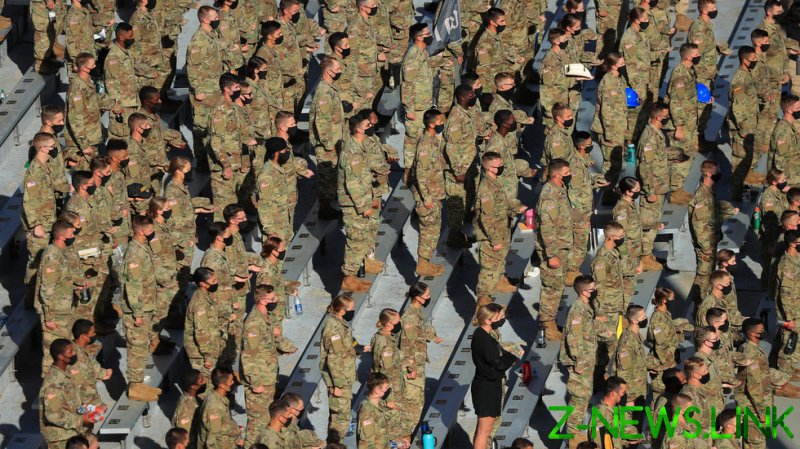 Occasionally a book comes along that captivates the imagination of the establishment gatekeepers less by the intellectual foundation upon which it is built than by its extreme ideological tilt. ‘One Billion Americans’ by Vox journalist Matt Yglesias promises to be that book. The premise is simple to the point of absurdity, and I quote: “To stay on top, we probably need to grow the country threefold – to one billion Americans.”

The author has a quintessentially liberal solution for reaching that astronomic number – “more immigrants and more programs to support people who want … additional children.” Before delving into that proposal, what emergency could be so pressing that the United States needs another 700 million Americans vying for living space on an already crowded planet?

Russia may be relieved to know that in this latest American ‘crisis’ it is not the arch villain. That distinction goes to China, the rising superpower of the East that is just begging for an American response. Yglesias frets that against the burgeoning numbers of Chinese – 1.4 billion to be exact – the United States is just a “little dog” on the block.

“There are more than 1 billion of them to about 330 million of us,” the Vox contributor observes nervously, as if coming up short in a manhood-measuring contest. “Chinese people don’t need to become as rich as Americans for China’s overall economy to outweigh ours.”

Yglesias seems to have forgotten that some of the smallest nations in the world – Japan, South Korea, Iceland and the Nordic countries, for example – rank among the highest performing economies per capita in the world. More importantly, they are punching far above their weight without sacrificing social cohesion and wellbeing. A bigger America, by comparison, might make for bigger consumer spending and GDP, but it would ultimately transform the country into the world’s largest dumpster fire.

With regrettable timing, Yglesias’ book will hit bookshelves at a time when calling for a larger US population seems about as effective as passing around a bottle of whiskey at an Alcoholics Anonymous meeting. Seemingly intractable domestic problems, like grinding poverty and rampant crime, are no longer concealed below the deep fissures of society. In many major US cities, pedestrians must navigate sidewalks the poor now call home, while the US prison system is bursting at the seams; about 700 Americans out of every 100,000 are wasting away behind bars, the highest incarceration rate in the world. On top of this, race-fueled anti-police riots, spurred on by the radical left wing of the Democratic Party, are helping to make American society more fractured than ever before.

Now imagine what tripling the number of Americans would look like. Since it is not hard to foresee imminent disaster by such a radical proposal, could there be another reason for Yglesias pounding on about increasing America’s already high numbers?

Here it is necessary to say a word about the author and his former political affinities, particularly with those related to US military ‘interventionism,’ which I fear goes far in explaining his desire to see a US population explosion.

Matt Yglesias was one of many American journalists who shook the pom-poms in support of Team Bush’s disastrous decision to invade Iraq in 2003. Personally, I automatically question the analytical abilities of any individual who clamored for that invasion at a time when UN weapons inspectors were on the ground in Iraq practically screaming that they could find no trace of weapons of mass destruction. It is the job of journalists to keep governments in check, not to encourage their jingoistic impulses.

Even before US missiles were raining down on Baghdad, however, Yglesias, musing about Iraq, Iran and North Korea, members of the so-called ‘axis of evil,’ wrote that the United States “should take them all out.” Later, speaking in defense of “liberal internationalism,” which is just Orwell-speak for “American interventionism,” the Harvard grad said Washington has the power to “intimidate others into going along with us … or along mutually accepted ideas or interests.”

In light of those hawkish sentiments, Yglesias’ wild proposal for 700 million more Americans may in reality be a call to balance the military scales against Beijing in Washington’s favor. After all, ‘boots on the ground’ require warm bodies and here is where China, with its 2.3 million active troops, enjoys a definite strategic advantage.

Ironically, Yglesias’ book is making its debut in the very same month that the Pentagon has released its annual ‘China Military Power Report,’ which describes how Beijing plans to make its military “world class” by the end of 2049. Washington, despite its hundreds of military bases dotting the planet, is concerned that its Asian rival will shed its isolationist tendencies as it starts to leave a military footprint far from home, presenting a direct challenge to American supremacy.

A shot across the Republican bow?

Even more worrisome than the US-China rivalry, liberals like Matt Yglesias are obsessed about asserting control over the US political system against the Republican Party, and Donald Trump in particular. A rapid increase in the US population through immigration would effectively achieve that goal. It is no secret that new arrivals to the US have a strong tendency to vote Democratic.

Thus, it comes as no surprise that Yglesias argues the US should not “tie ourselves into knots trying to stop the flow” of immigrants into the country. He then resorts to the tired canard of ‘systemic racism’ to bolster his claim: “Immigrants…may look like a threat to some xenophobic Americans, but they make native-born Americans richer and fuel the kinds of innovation that can help the country grow.”

That statement is open to interpretation since a large number of the new arrivals to the United States, many from impoverished countries in South America, are bringing with them problems that “native-born Americans” will be forced to live with. That is not a racist argument, just common sense. At the same time, in order to accommodate this great influx of new arrivals, the majority of whom are not rocket scientists, Yglesias supports the controversial idea of rewriting housing policies (which he also calls ‘racist’), that prevent the construction of multiple-family dwellings in suburban areas. In other words, say goodbye to the quiet suburbs – bastions of ‘white privilege,’ as the current liberal narrative goes – where millions of Americans flock to escape the hustle and bustle of the city.

On a side note, it will be interesting to read how Yglesias will square the circle of promoting the idea of massive population growth (of the world’s largest consumer society, no less!), which promises to exacerbate many of the planet’s problems connected to over-population, pollution and poverty. Indeed, at a time when many liberals are following in the footsteps of the young climate-change activist Greta Thunberg, it is hard to understand how social justice warriors have not lambasted this writer and his views.

The reason for this silence in the face of this great contradiction, I believe, is because Matt Yglesias seems to be promoting an agenda that is dearer to the heart of Liberals than few of them would ever admit. To sum up, the first is military superiority and dominance, which has become a strange bedfellow of liberals and the Democratic Party. One billion Americans would help close the troop disparity that now exists with China. The second is that a massive population explosion would most likely guarantee the extinction of the Republican Party, granting the Democrats de facto freedom to behave (aggressively) with impunity long into the future.