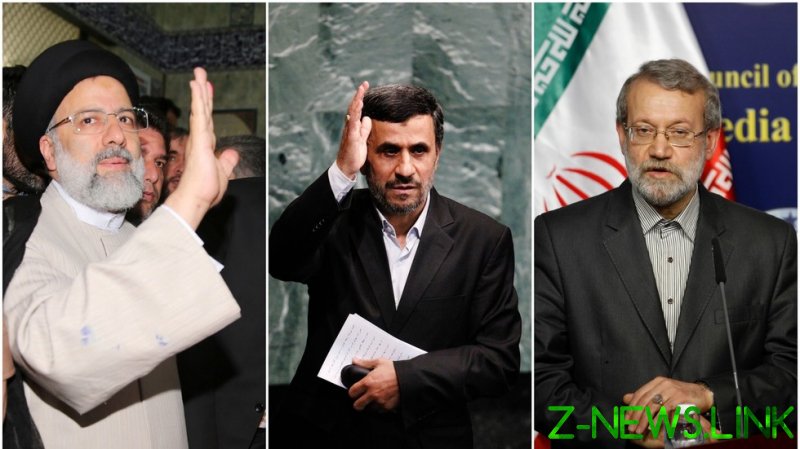 Iran is heading for presidential elections scheduled for June 18 that will determine a successor to the incumbent President Hassan Rouhani. The president is considered a moderate politician who led Iran into the 2015 nuclear deal. He cannot seek re-election since he is barred from running for a third consecutive term.

Yet, there is no shortage of those willing to take his place. One of them is the former Iranian President Mahmoud Ahmadinejad, a hardliner who saw Iran’s relations with the West souring over the Islamic Republic’s nuclear program. As a result, the country was slapped with several rounds of UN sanctions. However, the former president still has sway in some parts of the country.

Surrounded by a crowd of his supporters, Ahmadinejad arrived at the Iranian Interior Ministry to register for the race on Wednesday. The ex-president, who has since sought to present himself as a more “centrist” politician, was already barred from running back in 2017.

He criticized elections in Iran as an “empty drum” and said that another disqualification, which is not unlikely, would only prove him right. “If I’m disqualified, I won’t support the elections and I won’t vote,” he said.

Ahmadinejad, however, is not considered to be a likely frontrunner in the race that is about to start. The last registration day saw two Iranian political heavyweights – the ultraconservative Chief Justice Ebrahim Raisi and moderately conservative former parliament speaker Ali Larijani – submitting their candidacies as well.

Raisi, a man also bearing the title of Hojjat al-Islam – second in the Shiite cleric hierarchy only after that of Iran’s Supreme Leader Ayatollah Ali Khamenei – already ran for presidency in 2017 but lost to Rouhani.

Now, he runs on a platform promising a “change” to Iran’s “executive management” and a “relentless fight against poverty and corruption, humiliation and discrimination.” As the chief justice, Raisi launched a massive anti-corruption campaign. Yet, he is reportedly considered a “hardline” judge among the reformists.

He said that he is running as an “independent” and does not consider himself as a rival to any “political groups.” Still, he has already received backing from Iran’s conservative and ultra-conservative political camps. Raisi also previously criticized the 2015 nuclear deal struck by Rouhani and slammed the incumbent president’s “weak efforts” in negotiating the agreement.

Raisi’s potential major rival – Ali Larijani – is not seeking to run for president for the first time either. He already fought for the post back in 2005 but lost to Ahmadinejad. Later, he served as the secretary-general of the Supreme National Security Council of Iran and was the parliament’s speaker until 2020.

A moderate conservative, Larijani, is reportedly being sought out as a potential ally by both conservatives and reformists. He also serves as an adviser to Ayatollah Ali Khamenei. The politician is also one of the supporters of the 2015 nuclear deal.

The former parliament speaker apparently plans to focus his campaign on economic issues. He explained his decision to join the race by the fact that other candidates “cannot solve the country’s main economic problem.”

He also took a veiled jab at Raisi and some other candidates by saying that “the economy is neither a garrison nor a court that would be managed with shouts and orders.” Larijani then warned that Iran’s way out of the economic crisis would be neither quick nor easy. Those who are “promising paradise in this complicated state” are speaking falsely, he said.

The upcoming presidential elections are bound to influence the fate of the 2015 deal, which is still hanging in limbo after the US’ unilateral withdrawal under then-President Donald Trump back in 2018. Iran and the world powers are currently engaged in talks in Vienna in an attempt to revive the deal.

Larijani is one of the few who expressed his support for the negotiations aimed at saving the agreement that has been repeatedly criticized in Iran by Rouhani’s opponents, including some of the presidential candidates.

“I hope the negotiations produce results [as] it can provide a breathing space for the country’s economy,” Larijani said.

All candidates are yet to be vetted by the Iranian Guardian Council – a 12-member body consisting of six Islamic law experts and six jurists – before they can actually run for office. The council is expected to publish the list of approved candidates by May 27, after which the election campaign will start.