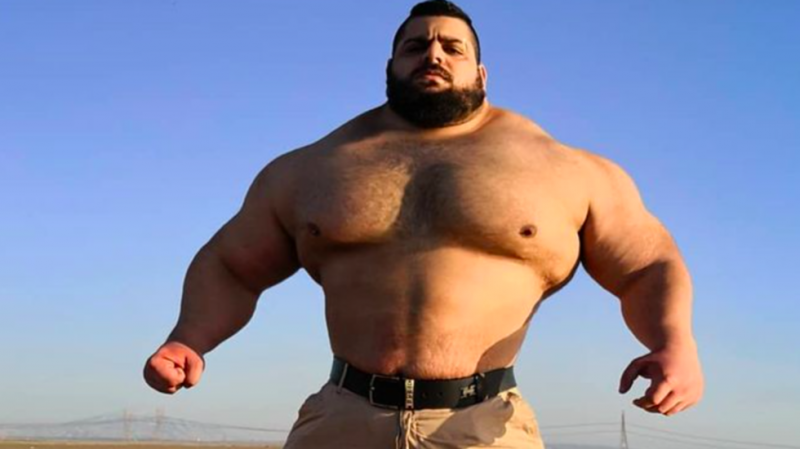 Sajad Gharibi, better known by his social media moniker of the ‘Iranian Hulk’, has hit out at his rival Martyn Ford for accusations that his Instagram fame has been built on heavily-edited photographs.

Gharibi, who is set to tangle with Ford – who has been tagged by some as the ‘world’s scariest man’ – in the boxing ring in London on April 30 but after coming face-to-face in a press event last week, the giant 6ft 6in Ford claimed that Gharibi’s Instagram pictures made him look a lot bigger than he is in reality, and suggested that the Hulk’s bark would be worse than his bite.

Ford also claimed that Gharibi had “fooled the world” into thinking he was bigger than he really was, telling the Daily Star: “He was not what I expected. I think he’s just fooled the world with Photoshop, if I’m honest.

“Seeing him in real life is not as impressive as seeing him in pictures. So disheartening I think is the word. He was tiny.

“He didn’t look anything like he had made out. That was the first time I’d seen him in real-life.

“He was big, probably bigger than 18 stone (252lbs), but he wasn’t scary big. He just felt like a big kid that didn’t really train if I’m being honest. He was supposed to be twice my size.“

However, Gharibi has since rubbished Ford’s claims that he is undersized and says that his true fans know the truth about his giant frame.

“Look, those who have been following me on Instagram and know me since the old days,“ he said via the Mirror.

“They have watched my live videos and the ones I had posted and have seen me when I had just joined Instagram and had a lot more weight on. I had 120,000- 200,000 followers then.

“If you ask my followers about how I lost weight, they would say I had done it little by little. I was categorised in the extra heavy weight category in 2019.

“After the pandemic was started in 2020 and after gyms were closed, I slowly lost weight; but the question is why do they compare photos from 2017 with the recent ones?

“Some rumour-making press would come and make such comparisons, while I posted some old videos and videos cannot be photoshopped.

“There are also some of my live videos available on YouTube, they are undeniable! I wear XXXXXXXL sized clothes. When I used to weigh more, those clothes looked tight for me.“

Gharibi has also been hit with steroid accusations throughout his internet infamy, another claim which he vigorously denies and he has vowed that any and all drug tests ahead of his boxing match with Ford will be passed with flying colors.

And with the rivalry heating up to new levels Gharibi also aims to prove that, much like his more famous namesake, Ford won’t like him when he’s angry.