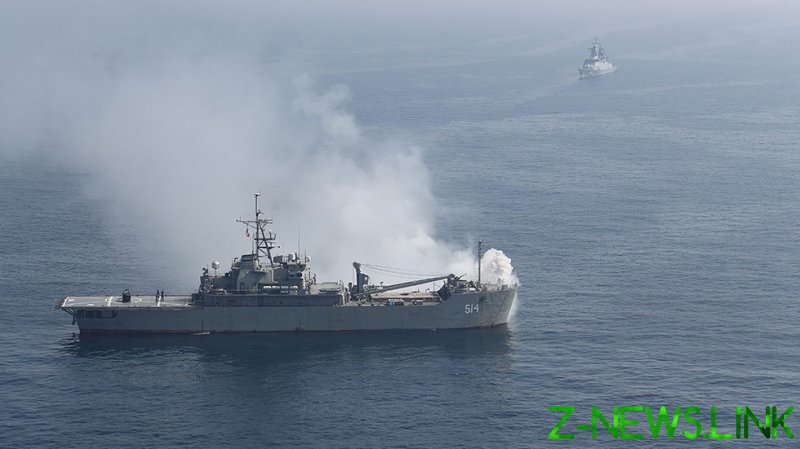 Speaking on Tuesday, Commander Rebecca Rebarich, a spokeswoman for the US Navy’s Middle East-based Fifth Fleet, told the Associated Press that there had been two incidents of “unsafe maneuvers” by Iran’s Islamic Revolutionary Guard Corps (IRGC).

In a video published by the US Navy, the Iranian Harth support ship appears to cut in front of the United States Coast Guard Cutter (USCGC) ‘Monomoy’ on April 2, causing the American vessel to suddenly stop with its engines smoking.

Rebarich said the USCGC ‘Wrangell’ was also subjected to the same aggressive behavior.

She added that the Iranian vessel finally moved away from the US ships after about three hours of being issued warnings, with the Americans allegedly carrying out further defensive maneuvers.

Iran has not commented on the incident.

Rebarich described the encounter as the first “unsafe and unprofessional” actions involving Iran since April 15, 2020. In previous years, the US Navy has recorded considerably more such alleged incidents, notably 35 in 2016.

Iran’s Revolutionary Guard sits under the control of Supreme Leader Ayatollah Ali Khamenei, with the president acting as second-in-command.

The terse naval movements took place as negotiators in Vienna discussed the return of both the US and Iran to the 2015 nuclear pact, which put limits on the latter’s atomic ambitions. Relations between the two countries grew considerably strained during President Donald Trump’s administration, with the US leader pulling America out of the 2015 deal and subjecting Iran to crippling sanctions.