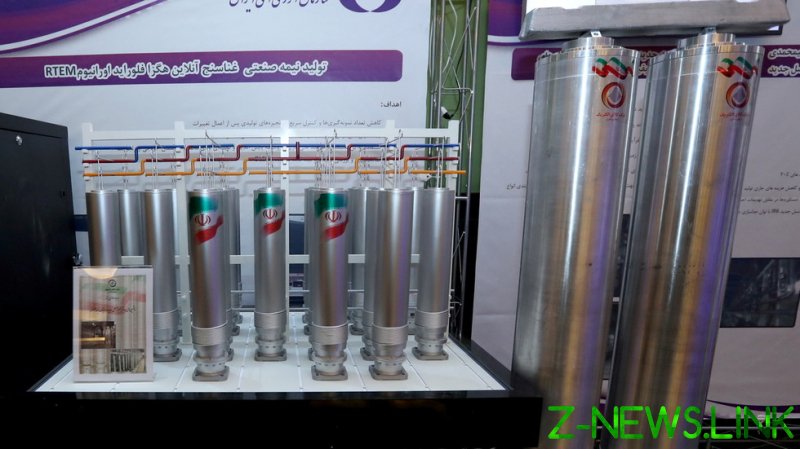 The news was broken by the speaker of the Iranian parliament, Mohammad Bagher Ghalibaf, on Friday.

“I am proud to announce that at 00:40 … Iranian scientists were able to produce 60%-enriched uranium,” the speaker said on Twitter.

The achievement was confirmed by the head of the Atomic Energy Organization of Iran, Ali Akbar Salehi. The official said the 60% uranium enrichment process was “underway at the Martyr Ahmadi Roshan nuclear facility,” referring to the Natanz plant.

“We are producing about nine grams of 60% enriched uranium an hour,” Salehi said. “But we have to work on arrangements to drop it to five grams per hour.”

“60% enrichment is an answer to your evilness,” Iran’s President Hassan Rouhani has said, as he promised to “cut both hands” of Iran’s enemies with the sharp enrichment hike.

The Natanz facility suffered a major power outage last Sunday, which resulted in damage to a number of uranium-enriching centrifuges. Tehran has promised to replace the damaged equipment, as well as to install additional devices at the facility in the aftermath of the suspected attack, which it blamed squarely on Israel. While Israeli involvement in the incident was reported by multiple US and Israeli outlets, Tel Aviv has remained silent on the matter.

The incident came amid talks in Vienna that had been attempting to revive the long-comatose 2015 nuclear deal, officially known as the Joint Comprehensive Plan of Action (JCPOA). The deal effectively fell apart after then-US President Donald Trump pulled out in early 2018, accusing Tehran of violating its “spirit.” Since then, Washington has imposed numerous sanctions on Tehran, and Iran has gradually expanded its nuclear activities.

While Tehran accused its alleged attackers of trying to undermine its negotiating position via the sabotage at Natanz, European signatories to the JCPOA were more alarmed at the 60% enrichment move.

“This is a serious development, since the production of highly enriched uranium constitutes an important step in the production of a nuclear weapon. Iran has no credible civilian need for enrichment at this level,” the UK, Germany, and France said in a joint statement on Wednesday.

Tehran dismissed such concerns, reiterating that its nuclear program pursues only civilian and peaceful goals. “We could have done 60% [enrichment] before. Today, we can do 90% enrichment if we want to, but we are not seeking a nuclear bomb,” Rouhani said on Thursday.