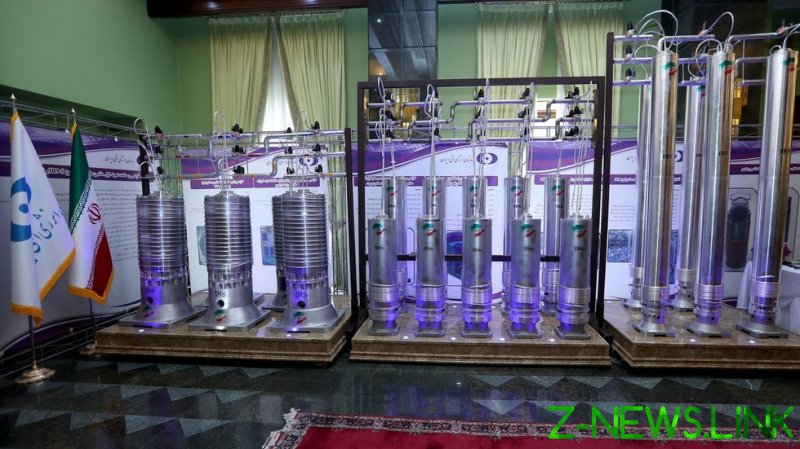 Abbas Araghchi, a deputy foreign minister who serves as Iran’s chief negotiator with P5+1 – Iran’s counterparts in the 2015 nuclear agreement – announced the step on Tuesday speaking to English-language Iranian channel Press TV. He said Tehran will inform the UN’s nuclear watchdog, the IAEA, that Iran will be producing 60% enriched uranium, starting Wednesday, putting it further in breach of the terms of the deal.

The official also said Iran will introduce 1,000 new centrifuges at the Natanz facility in addition to replacing those damaged by a suspected act of sabotage on Sunday.

The underground plant experienced a power outage last weekend, which Tehran blamed on Israel. Media outlets in Israel and the US reported that the intelligence agency Mossad targeted the facility, but Israeli officials would not comment on the nation’s alleged involvement.

Iranian Foreign Minister Javad Zarif claimed on Monday that the suspected attack was meant to derail negotiations between Iran and the US, which are currently taking place in Vienna. The talks are meant to salvage the Obama-era deal by allowing both countries to come back into compliance with it.

The agreement was torpedoed by Donald Trump, who pulled out of it in 2018 to pursue the so-called “maximum pressure” campaign against Iran, targeting it and its business partners with harsh economic sanctions. The agreement, known as the JCPOA, was for Iran to accept restrictions and IAEA monitoring of its nuclear industry in exchange for the lifting of sanctions and lucrative trade opportunities with Western nations.

Iran began reneging on its obligations under the deal a year after Trump’s withdrawal in an attempt to use that as leverage against the European signatories whose protection they were seeking from US sanctions.

The Biden administration indicated it wanted to restore the JCPOA, but Washington and Iran have so far not agreed on a way to do it – and there is no guarantee that the Vienna talks will lead to a breakthrough. Araghchi arrived in the Austrian capital on Tuesday for the next round of discussions, which the two countries conduct indirectly through EU intermediaries.

Uranium enriched to 60% is not suitable for production of nuclear weapons, but generating a stockpile will hypothetically put Iran closer to a “breakout” scenario, in which the country could rush produce a working nuclear device in as little time as possible.

The JCPOA was meant to make such an outcome harder by, among other things, putting a cap on the grade of uranium and the amount of it that Iran is allowed to keep on its soil. Previously Iran enriched uranium to 20%, which was a lesser breach of the accord. Tehran denies having plans to acquire nuclear capability and says the use of weapons of mass destruction is prohibided under tenets of Islam.

Israel claims Iran wants to go nuclear in an attempt to destroy it and has repeatedly pledged to do everything to stop what it regards as an existential threat. Prime Minister Benjamin Netanyahu reiterated that stance on Monday, after the incident at Natanz. Israel itself is understood to have around 80 nuclear weapons in its arsenal – as well as various means of delivery – but its policy has been to neither acknowledge nor deny this.

Earlier in the day, Iranian Foreign Ministry spokesman Saeed Khatibzadeh said his country will take “retaliatory measures within the framework of the JCPOA” in the wake of the “recent nuclear sabotage.”