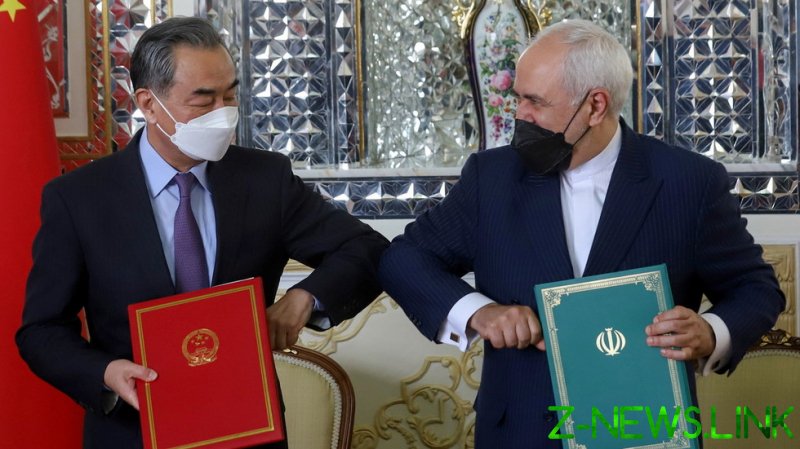 The landmark document was signed during a televised ceremony by visiting Chinese Foreign Minister Wang Yi and his Iranian counterpart, Mohammad Javad Zarif. The document was described by the Iranian side as “a complete roadmap with strategic political and economic clauses covering trade, economic and transportation cooperation.”

The Chinese minister hailed Iran’s independence of foreign policy, according to Iranian media, saying that it “is not like some countries that change their position with one phone call.”

Wang arrived in Iran on Friday for a series of meetings with top Iranian officials, including President Hassan Rouhani and Ali Larijani, the ex-speaker of the parliament and a senior advisor to Iran’s Supreme Leader Ali Khamenei. The visit marks the 50th anniversary of diplomatic relations between Tehran and Beijing and is part of a larger tour across the Middle East by the top Chinese diplomat.

The Sino-Iranian Comprehensive Strategic Partnership was first announced in January 2016 during a visit to Tehran by Chinese President Xi Jinping. The agreement is touted as securing Iran’s participation in China’s Belt and Road initiative, which is aimed at diversifying trade routes between China and its key partners through ambitious infrastructure projects in various countries.

The visit coincided with an incident in the Suez Canal, which is currently blocked by a mammoth container ship that ran across it earlier this week. The waterway is a major trade route, so its unavailability for maritime traffic gives weight to the Chinese trade diversification effort.

China is a major trade partner for Iran. Both countries are also targeted by the US, which accuses them of human rights violations and has slapped them with various sanctions. Iran in particular was subjected to crippling economic sanctions under the administration of US President Donald Trump, who opted for a so-called “maximum pressure campaign” against Tehran, threatening other nations in order to stop them from doing business with Iran.

As part of the policy, Trump withdrew from the 2015 nuclear deal, which involves Iran and major world powers, including China. Tehran was offered a relief of international sanctions and profitable business opportunities in exchange for agreeing to restrict its nuclear industry.

Iran started gradually reneging on its part of the bargain a year after Trump’s demarche, saying the steps were meant to leverage the European signatories of the deal into shielding Iran from Washington’s sanctions and thus deliver the promised benefits. The Biden administration said it wanted to return to the agreement, but it has refused to do so until Iran fully complies with it again.