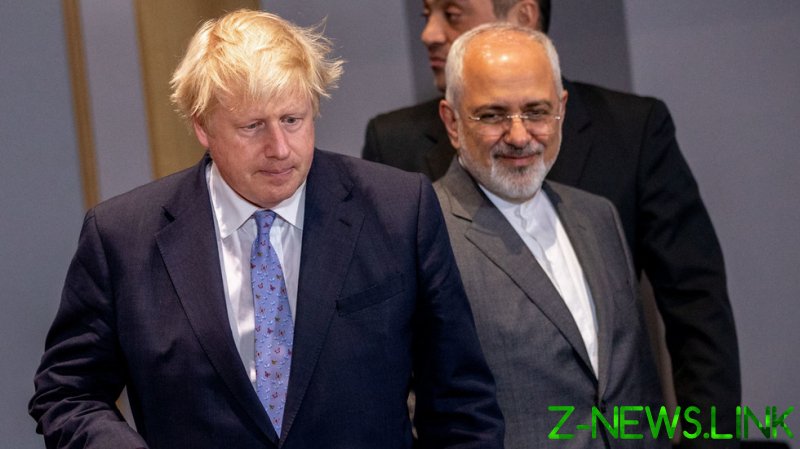 On Tuesday, Javad Zarif condemned what he called Johnson’s “utter hypocrisy” in a statement on Twitter, adding: “Unlike the UK and allies, Iran believes nukes and all WMDs [weapons of mass destruction] are barbaric and must be eradicated.”

Earlier in the day Johnson revealed that the UK would lift a cap on its own nuclear stockpile, allowing it to keep a total of 260 warheads, rather than being limited to 180, as had been set by previous British governments.

The PM was then quizzed about Iran’s role in the Middle East by a fellow Tory MP after unveiling the plans as part of the government’s Integrated Review Of Security, Defence, Development and Foreign Policy.

“We remain extremely concerned by Iran’s influence in the region, the disruptive behavior of Iran and particularly, of course, we are concerned by the risk of Iran developing a viable nuclear weapon,” Johnson told MPs in the House of Commons.

He added that it would be beneficial for the security of the people of Iran and the wider Middle East if the state returned to the 2015 nuclear deal, known as the Joint Comprehensive Plan of Action (JCPOA).

In recent months the deal has been a major flashpoint between Iran and the Western signatories of the JCPOA, including Germany, France and the UK, which have all called for Iran to stop breaching its commitments.

US President Joe Biden has said Washington will return to the deal, which provides sanctions relief for Iran, if Tehran stops undermining the agreement by stepping up its uranium enrichment – a crucial step in the development of nuclear weapons.

For its part, Tehran has repeatedly said it would be prepared to fall back into full compliance under the deal if the US drops its sanctions against Iran.

The UK’s security review accuses Iran, Russia and North Korea of destabilizing their respective regions and the “weakening of the international order.”

The 100-page document says it is the UK’s priority to “prevent Iran from developing a nuclear weapon” and that it remains open about further JCPOA talks.