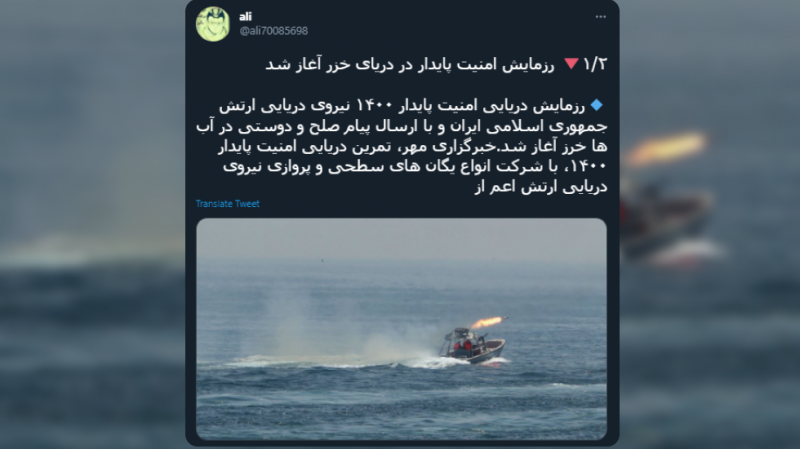 On Wednesday morning, the naval and airborne units of the Iranian armed forces began their Amaniyat-e Paydar (Sustainable Security) 1400 naval drill, which saw the participation of several units, including fixed-wing aircraft, helicopters, and naval drones.

According to local media, the exercises test the interoperability of Iranian hardware and the use of missile launchers and electronic warfare systems in simulated wargames.

The armed forces will simulate both offensive and defensive scenarios, testing their capacity to protect the country’s territorial waters and maintain transportation lines.

Iran occupies approximately 20% of the Caspian Sea, which it shares with Azerbaijan, Kazakhstan, Russia, and Turkmenistan. It has carried out several drills, some of them naval, over the past year, both putting new defense technologies to the test and showing the world its military might.

In January, it undertook a two-day naval drill, known as Eghtedar (Authority) 99, to test its ability to “react in a timely and effective manner” against enemy threats, according to the navy’s deputy commander for coordination, Rear Admiral Hamzeh Ali Kaviani.

Iran has attempted to bolster its naval capacity amid increased animosity with the US and its Western allies, launching the indigenously developed Makran forward base ship and more than 300 armed speedboats.