Investors in Russia is more profitable eternal building, not upgrading 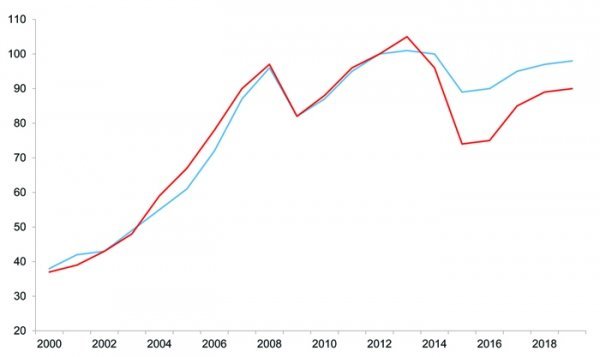 Began investment collapse exacerbates the distortion, which is observed in the Russian economy in recent years: investors prefer to invest in the construction of buildings with the expectation of a quick return, not valuing the purchase of machinery and equipment. This is from the surveys of the Center for macroeconomic analysis and short-term forecasting (CMASF) and the Institute of economic forecasting of RAS (Moscow, Russia). Eternal building can accelerate growth, but to a certain limit. For the development of the need to Fund technology updates.

In the structure of investments in fixed capital of the Russian Federation expenses on machinery and equipment are replaced by investments in construction and installation work, reported in INP ran, adding that most clearly this trend, starting in 2014.

Not to say that it’s definitely bad for the economy because the multiplier effect of construction works is high, it allows you to accelerate economic growth, follows from the explanations of IEF RAS. But this increase happens up to a certain limit, because without technological modernization, the growth potential is usually small. If you do not reverse this situation, it is unlikely that we will ensure the transition to another level of economic development.

According Smaka, in April, the collapse in investment activity in the Russian Federation made on a monthly basis, 13.5 per cent. “The supply of investment goods made up of 84.3% compared to April 2019. The weakest dipped offer building materials (9.9%), significantly more – imports of machinery and equipment (14%), and most significantly – their internal manufacturing: 20.7%,” – said the researchers. 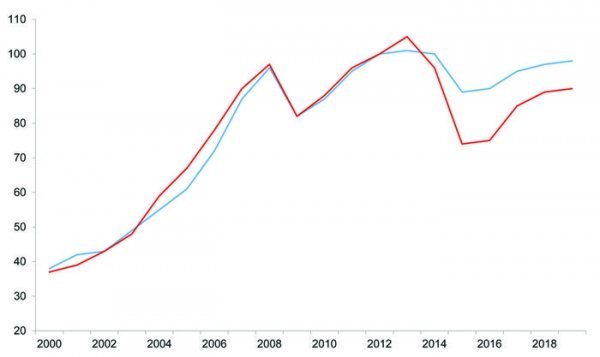 The blue line is all investments in fixed capital the basic level
pre-crisis of 2012 (it is taken as 100%). The red line investment
in machinery and equipment to a basic level. Source: Moscow, Russia

And, according to experts, neither the projects nor accepted in terms of coronavirus crisis National plan of anti-crisis actions do not help to fix the situation. For example, as explained by the Deputy Director of the RF Academy of Sciences Alexander Shirov, a National action plan should not only mitigate the impact of the crisis and to ensure sustainable growth. However, with some of its parts there is the same problem as with the national projects, which have been formed from state programs and did not anticipate a large influx of new money.

“The largest section of the plan for investment in infrastructure. Most of these expenditures are planned in the framework of the Comprehensive plan for the modernization and expansion of trunk infrastructure. Only now we can clearly see some redistribution of funding in the direction of the 2020-2021 years of follow-up time periods. And therefore, when such forming of additional effect of its implementation will be a little” – said Shirov.

As explained in conversation with “NG” associate Professor, Russian University of Economics Alexander Timofeev, investment skewed in favour of the construction works is even longer, and not past five or six years: “If we consider the percentage distribution of investments by types of fixed assets, the average for the last 20 years will fluctuate in the following proportions: about a 13% investment in dwellings, 42% – in buildings, non-residential, 37% – in machines, vehicles, appliances and other equipment and intellectual property accumulates only 3.5%”. “Skewed towards the construction sector is, its main source is the growing demand in the property market from almost all players, increased profitability and reduce the payback period. The volume of investments in commercial real estate in the first quarter of 2020 has increased more than two and a half times compared to the same period of 2019,” – said Timofeev.

At the same time, as recalled by the Director of market Analytics Podelu.ru Lily Fedulina, in 2014 there was a massive crisis, from which country came out within a few years. “When the dollar strengthened, to buy machinery and equipment abroad has become much more expensive, plus penalties imposed restrictions on trade – not all the past suppliers were prepared to work with Russia over concerns of new U.S. sanctions”. Then it was declared a policy of import substitution.

But, as noted Timofeev, at least in the Comprehensive plan for the modernization and expansion of backbone infrastructure and a huge potential, it is expected to Finance about a trillion rubles a year, but “it’s only a potential.” “The implementation of national projects involve a particular company, but in the target setting heads of most of them are long-term investment plans,” – said the expert. Enterprises are trying to invest in information, computer and telecommunications equipment, means of transport, “but usually it imports”. “Most industrial enterprises have been invested in projects aimed at the creation of import-substituting products”, – noticed Timofeev.

In his opinion, “the current structure of investments allows enterprises to move on the path of innovative development, which is the main source of investment in machinery and equipment.” “Overcome imbalances should help the revitalization of the capital expenditures of the Federal budget and monetary and credit conditions”, – said Timofeev. Experts also add to this the tax incentives.

“Investment in construction and installation works, emerging mostly from the construction of new buildings, shopping centres and large public buildings in terms of raw income countries pay off faster and easier than investing in machines and equipment for any production, says President of the nonprofit organization “Right to protection” Andrey Tutunik. To avoid this, it is necessary to leave from raw model”.