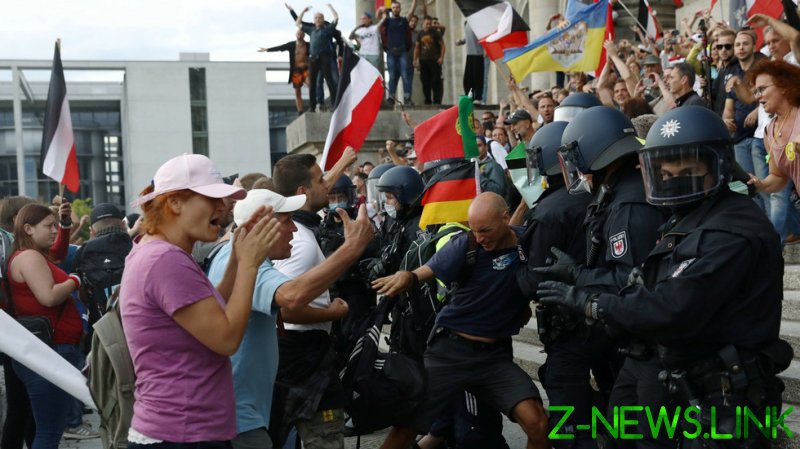 Many were baffled after footage showed one of the groups of protesters rallying against anti-coronavirus restrictions in the German capital breaking through police cordons with flags and banners and literally trying to take Reichstag by storm. Politicians all across the political spectrum have been left furious at the security lapse, but most of all at the Covid-sceptic protesters.

President Frank-Walter Steinmeier slammed the incident as an “intolerable attack on the heart of our democracy” that Germany would “never put up with.”

Interior minister Horst Seehofer branded the participants of the storming attempt “anarchists and extremists,”saying they were misusing their right for the freedom of expression in pursuit of their own goals. Finance Minister Olaf Stolz called on the authorities to “do everything” to prevent anything similar from happening anywhere close to the parliament again.

Secretary General of Chancellor Angela Merkel’s CDU party, Paul Ziemiak, suggested that the incident was a good enough reason to review the security concept for all governmental facilities.

The CDU head, Annegret Kramp-Karrenbauer, called the assault a “Nazi propaganda” action, while Alexander Dobrindt, an MP and a member of the CSU – Merkel’s Bavarian allies – rushed to declare the whole affair a deliberate and carefully orchestrated attack organized by “systemic enemies of democracy.”

Justice Minister Christine Lambrecht has demanded the state use its full power against the ‘attackers’: “We must defend ourselves, with the utmost consistency, against these enemies of our democracy,” she said.

What particularly got under the German politicians’s skin was the fact that many of the protesters were brandishing the flags of the German Empire that are popular among the so-called ‘Reich citizens’ – a fringe far-right movement that does not recognize the legitimacy of the modern German state.

However, the “far-right extremists” were certainly not the only group who took part in the improvised assault: people waving modern German flags as well as those of the US and Russia, and even some rainbow and anti-fascist flags could be seen in the crowd as well. 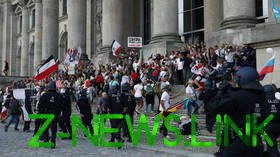 Anti-lockdown protests at the steps of the Reichstag building in Berlin on August 29, 2020. ©  Reuters / Christian Mang

Berlin saw more than 38,000 people hit the streets to voice their discontent over the anti-coronavirus restrictions on Saturday. Large crowds gathered near the Berlin Victory Column in the central Tiergarten Park and near the iconic Brandenburg Gate.

Most of the rallies were peaceful, yet some ended up with scuffles between the demonstrators and the police. Particularly violent clashes broke out near the Russian embassy, where the police scuffled with a 3,000-strong crowd of angry people, which also included the notorious right wing nationalists.

The embassy itself had nothing to do with the incident, although some videos showed a crowd near the embassy chanting “Putin! Putin!” It turns out, appeals to the Russian President, Vladimir Putin, and the US President, Donald Trump, were made by those protesters believing the two leaders could somehow influence the German government, particularly the policies they criticize.

Seven police officers were injured in the clashes and some 200 people were arrested near the embassy alone, according to the head of Berlin’s Interior Ministry, Andreas Geisel. A total of 300 people were detained throughout the day.