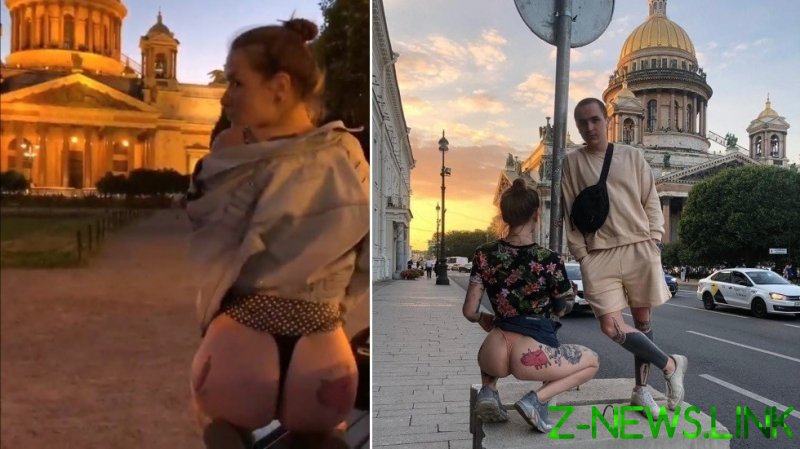 Investigators believe that Irina Volkova, who operates a private commercial Telegram account where subscribers can pay to access intimate snaps and videos, may have broken Russian laws against insulting the feelings of religious believers.

A similar stunt, carried out in Moscow, landed a Tajik blogger and his Russian girlfriend in jail this week. Ruslan Bobiev (whose real name is Ruslani Murojonzod) and Asya Akimova (Anastasia Chistova) caused widespread outrage after an image circulated showing Akimova on her knees, simulating oral sex while wearing a police jacket.

The pair, who used the backdrop of the iconic and world-renowned St. Basil’s Cathedral, were handed ten-month sentences.

In the Saint Petersburg incident, police said, on Saturday, they detained Volkova, who they did not identify by name, as part of the investigation, but have not yet indicated whether she will face charges. It’s not clear if anyone filed a formal complaint over the content.

Predominantly used now as a museum, St. Isaac’s also regularly hosts religious services, and Volkova’s critics say people could be offended by the racy images. Intentionally insulting people’s religious sentiments in a public space is punishable by up to a year in prison in Russia.

The detention of the mother of one seems to be part of wider hunt for online personalities who use churches as props for publicity stunts, triggered by the trial of Bobiev and Akimova.

The publicly available content that Saint Petersburg police are investigating was posted several months ago, and was deleted after the scandal broke. Volkova claimed that loan sharks were out to get her for being late paying them back. She has a small online footprint, with just over 4,000 followers on Instagram, and offers more explicit images of herself through a paid subscription to a Telegram channel.

The management of the museum distanced themselves from the scandal, saying that paying attention to “street racers, traffic, and whatever happens outside of Saint Isaac’s Cathedral” is not in their job description, and that they have no direct quarrel with Volkova.

Earlier this month, an OnlyFans model nicknamed Lola Bunny received similar flak over a video in which she flashed her breasts while also posing in front of St. Basil’s Cathedral.