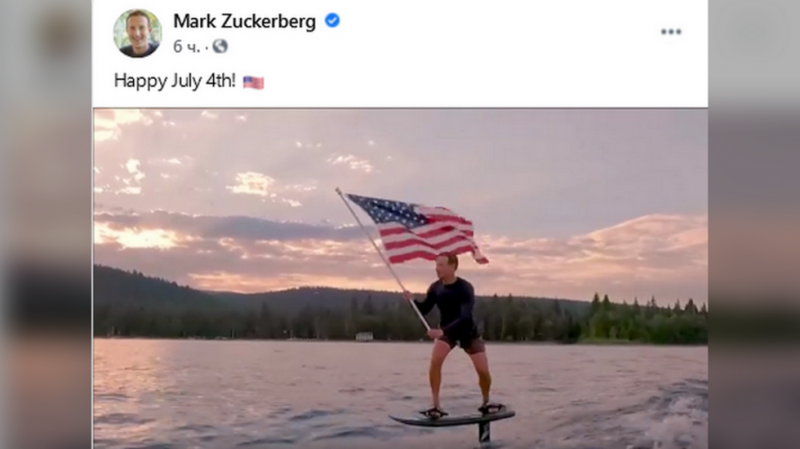 The one-minute video, which was posted Sunday on the Facebook CEO’s Instagram account, shows Zuckerberg riding a wake foil – also known as a hydrofoil surfboard — on what appears to be a lake. He holds an American flag, which is attached to a short pole, and Denver’s 1971 hit “Take me Home, Country Roads” plays in the background. Zuckerberg added a comment, saying only, “Happy July 4th.”

Other social media users wished for a new version of the scene, such as one who noted a “disturbing lack of sharks in this video” and another who tweeted, “I need a deep-fake version where he plows into the side of a dock.” Others expressed regret at having seen the video.

Alternative media journalist Luke Rudkowski quipped, “Extremist alert,” apparently alluding to suggestions that flag-wavers are likely to be far-right politically, as the New York Times intimated in an article on Saturday.

Some critics seized the opportunity to accuse Zuckerberg of cracking down on free speech on his platform.

“Mark Zuckerberg loves America,” conservative writer Ian Miles Cheong said. “He damn sure does – so much that he cares enough about wrong-think and takes the time to censor and ‘fact-check’ ideas from Americans and everyone else,” another commenter replied.

While Zuckerberg’s video might have backfired as a PR stunt, it at least gave Americans a rare topic on which they could agree. “Mark Zuckerberg may have united the left and right in America – just not in the way he planned,” said Vasabjit Banerjee, an international studies professor at Mississippi State University.