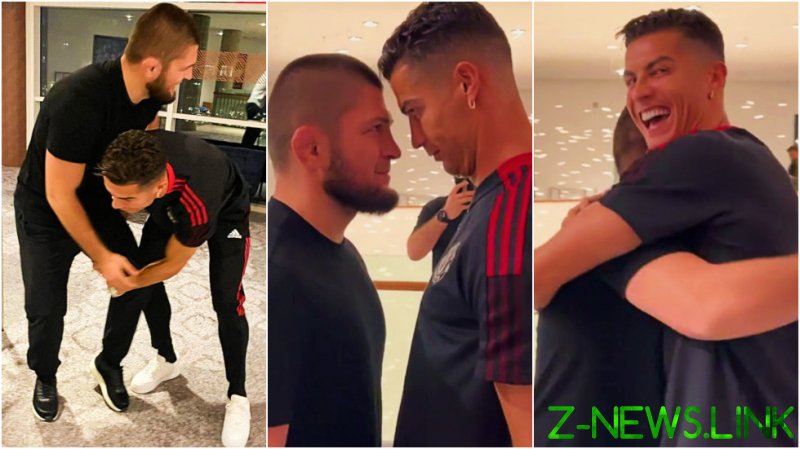 Long-time friends Ronaldo and Nurmagomedov have kept in touch regularly during the five-time Ballon d’Or winner’s Europe-crossing exploits, so it is little surprise that the pair met again when the former lightweight king was in Manchester at the weekend – although fans might not have anticipated a confrontation between the pair.

As proved the case for all of his challengers during his unbeaten MMA career, Ronaldo had far less success at grounding Nurmagomedov than he does in front of goal, and the Dagestani remained on his feet before engaging in a weigh-in style head-to-head with the Portugal captain.

In a stark contrast to his pre-fight encounters with the likes of fierce former rival and United fan Conor McGregor, football-obsessed Nurmagomedov was unable to keep a grin off his face as he stared into arguably the most famous footballer on the planet’s eyes.

That culminated in a laughing Ronaldo hugging the powerhouse who had advised him to leave Juventus before he made his seismic switch back to United at the start of this season.

Among the celebrity names to admire the pair on social media, one Mancunian who knows all about intimidating people in a face-to-face setting offered their blessing.

WBC kingpin Tyson Fury, who faces a colossal showdown of his own against Deontay Wilder on Saturday, responded: “Legendary link-up.”

Ronaldo and Nurmagomedov swapped shirts when the United hitman was establishing himself as a Real Madrid legend during his time in Spain, and the 33-year-old former fighter even discussed the record-breaking international goalscorer’s place in the team on Saturday.

Nurmagomedov was at Old Trafford to watch United endure an underwhelming 1-1 draw with Everton in the Premier League, when Ronaldo was kept in reserve and could not provide a breakthrough when he came on.

Speaking afterwards to Sir Alex Ferguson – with whom Ronaldo enjoyed stratospheric success at the club – Nurmagomedov appeared to be told by the legendary United manager that he felt Ronaldo should have started.

One of Ferguson’s former players, Ole Gunnar Solskjaer, is overseeing a stuttering period of form that has included three defeats in their last four matches.

The Dagestani, though, is in no doubt that prolific Ronaldo will continue to impress after returning to England.

“He is the best ever,” wrote Nurmagomedov, accompanying the clip of their grapple. “Keep doing your things, Champ – you inspire millions of people around the World.”