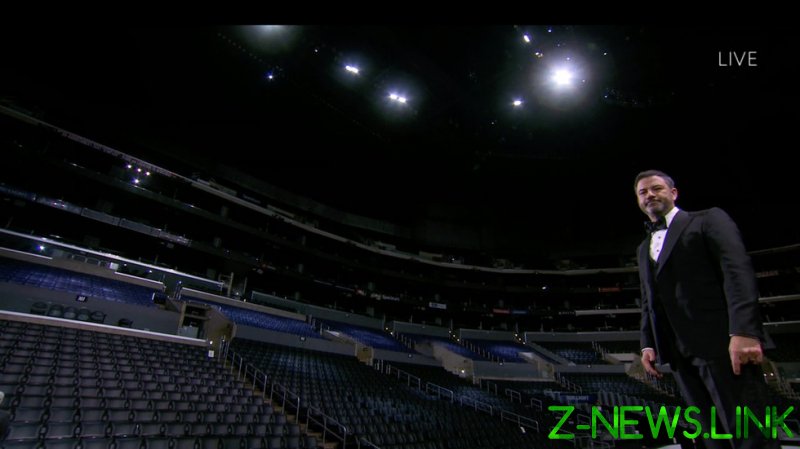 The entertainment awards ceremony, held at Los Angeles’ Staples Center with a ‘cardboard audience’, and dubbed by Kimmel as the ‘Pand-Emmys’, didn’t limit itself to quips about coronavirus.

In a provocative monologue, actor Anthony Anderson noted that there was a record number of black Emmy nominees this year, before turning to Kimmel and telling him: “This is the part where the white people start to applaud and nod.”

The black entertainer then lamented that nominees and guests couldn’t attend the ceremony in person, claiming that “y’all wouldn’t be able to handle how black it was gonna be.” Despite the setback, Anderson said that he was “still rooting for everybody black because black stories, black performances, and black lives matter.”

Then things got really awkward. Anderson ordered Kimmel to chant the popular slogan and complained that Kimmel wasn’t saying it loud enough.

“Say it with me, Jimmy. Louder, Jimmy. Say it so that Mike Pence could hear it,” he quipped.

The routine faced considerable backlash on social media, with many arguing that the exchange was demeaning and even racist.

Others observed that the “joke” clearly demonstrates how BLM supporters demand loyalty and punish those who refuse to voice solidarity with their cause – a scenario that has played out numerous times during protests across the country.

The comedy sketch was also criticized as excessively self-righteous virtual signaling. Many noted that Kimmel had caught flak for wearing blackface in an old skit, and that Anderson has been accused numerous times of sexual assault.

However, others argued that the provocative performance illustrated the growing political influence of the BLM movement. One comment predicted that “black folks won’t be quiet” in November and would vote out Donald Trump.

Hollywood has taken steps to brand itself as ‘woke’, following allegations that it discriminates against women and minorities. The Academy of Motion Picture Arts and Sciences recently announced new standards of representation and inclusion when considering films for Oscar awards. The new guidelines could come into effect at the 96th Academy Awards in 2024.