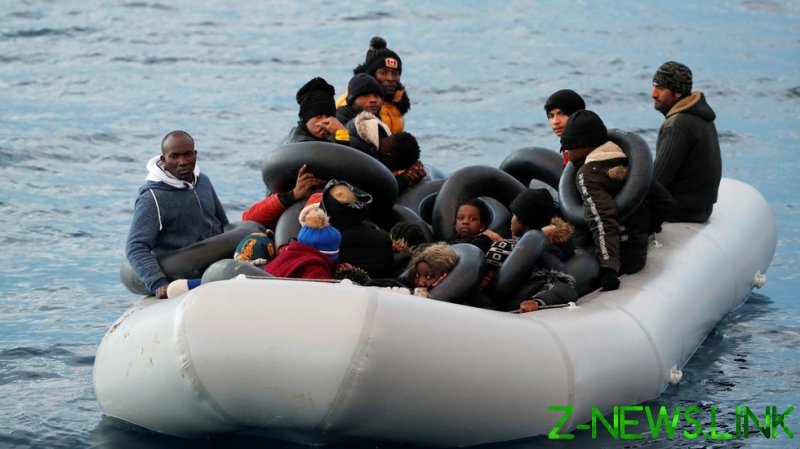 The Greek coast guards have been engaged in “torture and inhumane treatment every day,” Interior Minister Suleyman Soylu said in a Twitter post, addressing Greek Minister for Migration and Asylum, Notis Mitarachi.

The Turkish minister also posted a video supposedly showing a Greek Coast Guard vessel allegedly abandoning life rafts filled with migrants in the Aegean Sea to be picked up by Turkish ships. “Watch your forces engaging in [an] inhumane action,” the Turkish minister said, adding the European border guard agency Frontex is “complicit” in this practice while Brussels simply “ignores” it.

All of those rescued turned out to be members of the same group that was stranded on the Greek island of Farmakonisi not far from the Turkish Anatolia coast for two days before being picked up by the Greek coast guard. The Greeks then separated migrant men from women and children that were placed in a life raft and towed to Turkish waters.

The men then spent a couple of days on a Greek Coast Guard ship, where they were reportedly severely beaten while their money and mobile phones were “confiscated,” according to the Turkish statement. They also published a video showing a Turkish vessel rescuing the male part of the group, with the migrants showing injuries and scars they allegedly received at the hands of the Greek Coast Guard.

Greek officials, including Mitarachi, are yet to respond to Soylu’s claims.

Athens has previously denied such accusations and maintained it observes international human rights. Greece also shot back at Turkey on several occasions by saying it was the Turkish Coast Guard that “pushed” migrant boats into the Greek waters.

Relations between the two neighbors that have historically been quite strained have become particularly tense over recent months when Ankara and Athens locked horns over Turkey’s gas exploration efforts in the Eastern Mediterranean. Turkey maintains it is drilling for hydrocarbons in waters on its own continental shelf or in areas where Turkish Cypriots supported by Ankara have rights.

The EU is also concerned that encouraging refugees and migrants to cross the border from Turkey into Greece might be part of Turkey’s “pressure” strategy against Europe. Still, Brussels hopes for “responsible cooperation” with Ankara on the issue, as the European Council President Charles Michel put it just a day before the Turkish statement was published.

Turkey currently holds the largest refugee population in the world, with the government estimating that there are 2.23 million registered Syrians under Temporary Protection (SuTPs), who have been displaced by the civil war. Yet, the country is also apparently used as a hub by people from other parts of the world seeking protection in Europe.