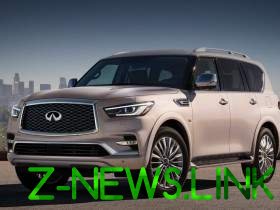 The premiere of the updated Infiniti QX80 was held in Dubai.

Contrary to expectations, presented at the motor show in Dubai is an updated version of an SUV, technically remains the same.

Exterior updated SUV has undergone major changes. In front is a little higher than its predecessor, the new led headlights, modified forms of the radiator grille, bonnet and grilles on the front fenders, different optics and a larger air intake on the bumper. The rear new led lights and slightly changed the tailgate and bumper. Updated wheel design, leaving unchanged the dimension of the tyres on both axles – 275/50 R22. In all probability, the ground clearance of the model (257 mm) remained the same.

Salon transformation is not as extensive and are limited to leather trim door panels and seats with diamond stitching and added a little in size with screens in the headrests of the seats of the first row. Regardless of the market already standard on the SUV equipped with multimedia system with navigation, Bluetooth, cameras, electric front seats and sunroof, heated all seats. 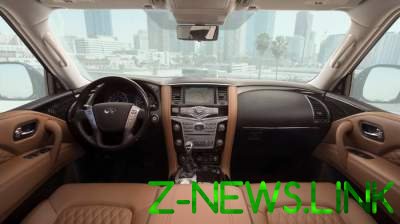 Despite the emergence of the concept Infiniti QX80 Monograph, gave hope for large-scale changes, technical filling Infiniti QX80 second generation has retained its former state. This is still the same frame SUV with three-mode four-wheel drive transmission as an option and reduction gear. Under the hood, the old 5.6-liter V8 with a power of 405 HP developing 560 N•m of torque. In a couple of his provided 7-speed automatic transmission. The previous generation QX80 with this set were dispersed to 210 km/h and accelerated to 100 km/h in 6.5 s. 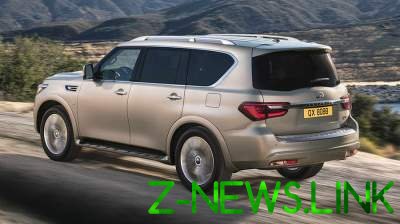 Production of the second generation has already begun. At the end of this year, the SUV will arrive on the markets of Asia, the Middle East and North America.