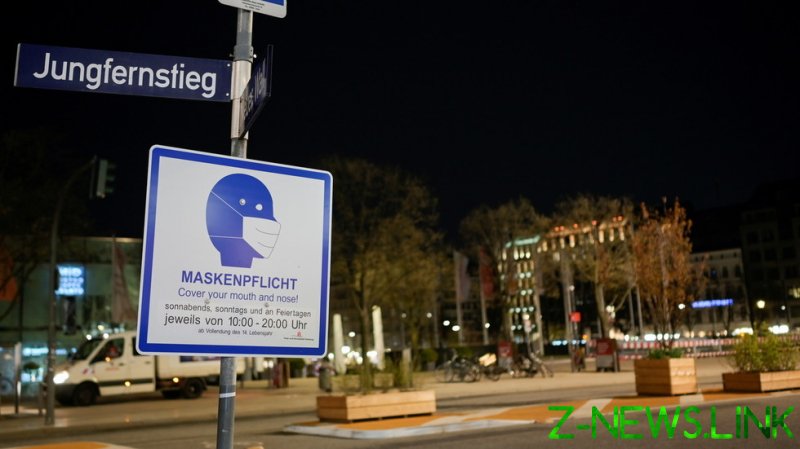 A total of 65 complaints have been filed against the so-called Infection Protection Act to date, the Federal Constitutional Court in Karlsruhe confirmed to the German media. A court spokesman also admitted that the real number of lawsuits could be higher since new ones are filed “all the time” and the court is not always able to process them in time.

Some complainants also filed urgent motions asking the court to suspend the law, which came into force just two days ago, until a final decision is made. Some suits were directed against the entire package of measures envisaged by the new law, while others focused on specific restrictions like the nighttime curfew that many Germans apparently see as unconstitutional.

Most claims were reportedly filed by individual complainants, including several German MPs. One of them is Florian Post, a member of the Social Democratic Party – a junior member of Chancellor Angela Merkel’s government coalition. Others include a Green MP, Canan Bayram, and a member of the right-wing Alternative for Germany (AfD) party, whose identity was not revealed.

The Liberal Free Democrats also lodged a complaint against the law with the Constitutional Court on Monday afternoon. The usually business-friendly party argued that the measures imposed by the law, such as the curfew and “other encroachments on fundamental rights,” are disproportionate and sometimes ineffective.

It is not known when the court will pass its judgement on the issue. It is also unclear whether the claimants should first reach out to some lower-ranking courts before filing the lawsuits directly in Karlsruhe.

The controversial law imposes binding restrictions on all German states and even individual communities as soon as they exceed a seven-day average infection rate of 100 cases per 100,000 people. The rules once again put severe limitations on private and public gatherings, as well as demanding that Germans stay home between 10pm and 5am, with exceptions for some emergency cases and professional activities. Non-essential shops would have to limit their number of customers or close entirely, depending on the situation, while people would also be required to work from home whenever possible.

It was passed by the Bundestag on April 21 following a heated debate despite vehement criticism from the opposition, and was approved by the Bundesrat later the same week. The law eventually came into force last Saturday.

The development also sparked negative public reaction as thousands took to Berlin’s streets just as the MPs were debating the legislation. The rally ended in scuffles with police and some 150 arrests.

Currently, 15 out of 16 German states have to apply the restrictions since they are all above the 100 per 100,000 people infection rate threshold. The Constitutional Court gave no indication that it would suspend the law pending the outcome of the lawsuits.